A Quick Look at the Thoroughbred Gunboat and Cutter Kits

While I'm working on some other projects, I thought I would post a short review of some of the Age of Sail ships that I purchased second-hand. I'll start off with a look at the two ships I have from Thoroughbred Figures Sea Eagles line.


First, I'll start off with the US 2-Gun Galley kit (EN02). This kit is a single-masted galley gunboat with two pivot guns and looks to based on some of the gunboats built as part of President Thomas Jefferson's gunboat navy for defense of the American coast. This kit looks pretty similar to the designs found in Howard Chapelle's The History of the American Sailing Navy: The Ships and Their Development. I seem to recall reading that one gunboat similar to this even made the trip across the Atlantic to serve with the American Mediterranean Squadron after the 1804 battles with the Barbary Pirates.

As you can see from the photo, there aren't too many parts in the kit. The main parts are the resin hull, the two 24 pound pivot guns, deck gratings, rudder, and mast components (mostly wooden dowels). So it should be pretty easy to assemble. 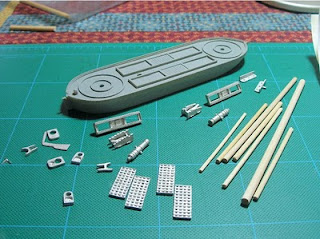 The kit comes with a nice plan showing the final mast assembly and general rigging plan. It also has a couple sheets of paper that can be copied onto colored paper to create the sails for the gunboat. Although, I haven't decided exactly how I want to rig and place the sail for the gunboat yet. The kit also came with a ship sheet for use with the Prevailing Winds rules. 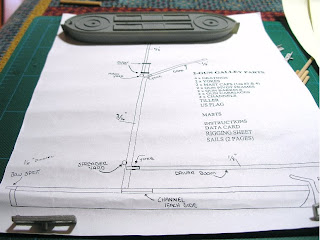 I've done some test fitting of the parts and the cast metal parts all seem to fit well. The only problems I can see are the hole for the mast in the resin hull is a little small for the wooden dowel that makes up the mast and the channels that need to be mounted for the rigging seem to have posts for mounting on the hull, but there aren't any corresponding holes in the hull for them. I'm not sure if I should drill out the holes or just try to glue the channels directly to the hull.

I really like this kit and I expect to use it in some War of 1812 battles and maybe it will make its way to the Mediterranean for fights against the pirates.

Next up is the British/French Naval Cutter (EN08)kit. This kit is about the same length as the gunboat, but is a little wider and has the raised sides. It looks to be just a generic smaller ship armed with 10 carronades and two long guns (they look like 12 or 18 pounders). 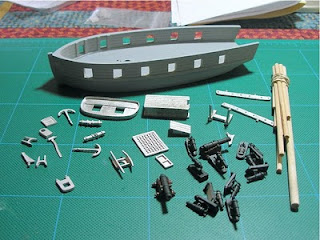 This kit has a few more parts than the gunboat, which will make it more interesting to assemble. My main problem is that the plan showing the mast assembly and rigging plan is missing from the box. But since I bought the kit second-hand, I guess I should be happy that all the parts are there. The sheets with the sails for copying were in the box and should be able to give me an idea of what I need to do with the masts.

All the parts seem to test fit together pretty well, although I think the deck will be pretty crowded once everything gets put in place on the hull and some crew members are added. Like the gunboat, the holes in the hull for the mast and bowsprit dowels are a tight fit and may need a little cleaning out and there don't appear to be any mounting holes for the rigging channels. It sort of makes me wonder if the intention for the rigging channels is only to mount them if you are doing a static model rather than a ship for gaming.

Overall I'd give the Thoroughbred ships a thumbs up (of course that may change when I actually start assembling the ships, but I doubt it). The resin hulls are well cast and solid, the metal parts all look good and clean, and the dowels, well they're dowels. It should be interesting to try out making the sails out of paper, but I may look at some other alternatives too.

Looking at these kits does make me want to add some other Thoroughbred kits to my little fleet (I especially like the look of the one-gun schooner and Mediterranean Felucca).