As mention in my previous post, I’m working on a Summer Solo Project this year. In the summertime I typically don’t have a lot of extra time for gaming or projects (my wife keeps me busy on the yard!). But I usually have a few hours to myself on the weekends, which is enough for some quick games. Since that time isn’t consistent, it is difficult to get together with anyone else. So I decided to try a solo project.

My project choice was to play tank actions from the World War 2 Western Desert Campaign using the Hell Hath No Fury rules from Two Hour Wargames. I chose the rules because they play well solitaire and because I wanted to keep the project fairly small and cheap, I decided to go with 1/285th scale tanks.

The Western Desert Campaign has always interested me for many reasons - there are lots of back and forth battles with opportunities for each side to be on the offensive and defensive, there are a number of different tanks used (especially on the British side), and it takes place in a relatively short period of time. From a gaming aspect, it is rife with possibilities (unless you want to play urban assaults). With that in mind, I pulled out a few references to figure out what tanks to include in my first stab at the project. I wanted to make sure that the tanks I got would cover a large part of the campaign and check with what was available in my chosen scale.

For the Germans, the choices were pretty easy. I started off with Panzer IIIs. These are GHQ Panzer III F/Gs, but will work for the E and H model too. The German tanks were all done up in German Green Brown (Grun Braun) with a dark wash and highlighting.
Next I went with a Panzer II F for the recon/light tank.
Finally, I chose the Panzer IV E/F1 to round out the Germans. At this scale the E model and F1 look pretty much the same.
That should give me pretty good coverage of German tanks for the campaign.
On the British side, I decided to start my focus on the battles of Operation Battleaxe and later. So, for the most part really early war tanks were out and, since I’m focusing on tank vs. tank action, I left out the Matildas and Valentines. My first choice was the Crusader tank, since it fits right in with that period. GHQ makes a Crusader I and Crusader III. I opted for the Crusader I and expect it to do double duty as a Crusader II. The Crusader was painted up in nice tan color with brown and black washes.
Next up was the M3 General Stuart, AKA ‘Honey’ tank. I always liked this tank and always thought the nickname was interesting. Although I recently heard a talk from the Flying Heritage Museum where the presenter said that the British never nicknamed the M3 ‘Honey’, which would seem to contradict just about every book I’ve ever read on these tanks. You can see the whole talk on YouTube. For the paint job, I went with a Caunter paint scheme I’ve seen in several places on the internet. It is a tan base, with a stone/blue, and green for the top layer. It turned out okay, but these (or any of my other tanks) won’t win any painting awards.
For my final batch of British tanks I went with the M3 General Grant. It was sort of a late-comer to the desert battles, but I got it to cover the Gazala and later battles. The paint job on these is a fairly simple tan with some green disruptive colors and a wash.
I could have selected several other British tank types, but these are good to get me started.
If the playing turns out well, I will probably expand my groups to include some Italians, along with some tank destroyers/anti-tank guns. I might even get some Matilda and Valentine tanks. Next up though is actually playing a game. I also need to put up a post about the rules and my work to come up with ratings for the tanks.

After taking a little time off after Enfilade and with my usual gaming slow-down for summer yardwork, I’m looking at getting back to some gaming stuff.

Early in June I had an unexpected windfall from a side editing project and I decided to put it into my long-term (meaning I haven’t do a lot of work on it) 15mm Age of Sail project. The main thrust of that project has been the American fight against the Barbary pirates and small gunboat actions. With that in mind I decided to order some 15mm ships from Old Glory Shipyard Buccaneer – Napoleonic Wars line.

Looking through the website, there were several ships I was interested in, but not too many photos of the models. I decided to take a chance on a couple un-photographed kits and ordered the Sloop-of-War Vixon and two Gunboat 5 kits.

There is no description of what the Vixon (which should probably be spelled Vixen) represents, since there were ships with that name in both the American and Royal Navy. Even the fact that they sell the same model in 1/300 scale didn’t help me know what ship it really represented. But I’m guessing that it would work for either ship. The American version was a 14 gun schooner (later changed to a brig rig) that took part in the First Barbary War, which is the ship I’m really looking for. The Royal Navy version was a 14 gun brig from the same timeframe.

When the kit arrived, it didn’t really have any information to clear up the question of what it represented, but it definitely was a brig rig. The ship will work fine for my project, so I guess it doesn’t really matter which ship it is representing. Here are a couple photos of the kit.
As you can see, the resin hull has some nice detail (although the gun ports are all filled and will take a little time to clean out). Overall it looks like a good addition to the fleet.

The Gunboat 5 kit definitely represents the American single-gun Gunboat 5 that crossed the Atlantic and served in the Mediterranean in 1805. It is a nice looking kit.

My only issue with the model is that it is relatively small, although the measurements seems to match those given in Chapelle’s The History of the American Sailing Navy book. My problem will be fitting many figures on the model.

These kits will get some work a little later this year. But for the rest of summer I have a couple other plans.

First up is my Summer Solo Project, which will be an adaptation of Two Hour Wargames Hell Hath No Fury rules to the Western Desert Campaign. 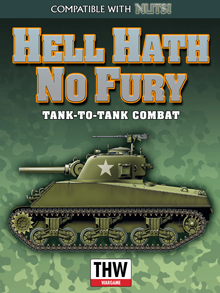 I had heard about the rules before Enfilade and had a chance to play them there. I like how quick they play and how easy they work for solitaire games. Unfortunately, they only have stats for a handful of American and German late-war tanks. So, I need to spend a little time coming up with stats for the Desert War tanks. I’m also trying to do this on a small (and somewhat cheap) scale, so my plan is to use 1/285 tanks. I’ll have more posts on this project later.

My other summer project will be finishing up and polishing my modern submarine rules. I’ve been working on these for a little while and I think I’m getting close to having something that I want to share with others.