Book Review - Intrepid Sailors: The Legacy of Preble's Boys and the Tripoli Campaign 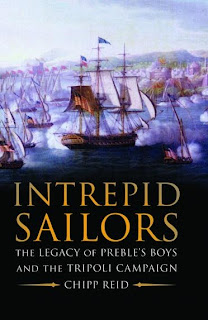 Intrepid Sailors tells the story of the American Third Mediterranean Squadron, commanded by Commodore Edward Preble, during the war against Tripoli in 1804. The book starts off with a background on the war, the squadron, and the main historical characters that were involved in the action. The names of the Americans will be familiar to most readers, especially if you have read any other history about the U.S Navy or just looked at the names of American warships. Mainly because almost all of the young officers with the squadron (such as Stephen Decatur, Richard Somers, Charles Stewart, and James Lawrence) became heroes during the Tripoli War or went on to greater exploits later. The author does make the point that many of the men of the Third Mediterranean Squadron went on to become role models for future generations of American sailors.

After setting the scene the book goes right into action, describing the grounding and capture of the frigate USS Philadelphia, commanded by Captain William Bainbridge. Preble, on the frigate USS Constitution, did not learn about the loss of Philadelphia until almost a month after the event and almost all of the actions for the Third Mediterranean Squadron would revolve around the captured frigate and her crew. In addition to the stories of the special mission to burn the captured Philadelphia and the subsequent gunboat battles between the Americans and Tripolitans, Intrepid Sailors also covers a number of other actions that are only briefly mentioned in most other books.

The author, Chipp Reid, did a good job of using original sources and later interpretations to create an interesting narrative about Preble's squadron. There is a lot of good information on the men and ships of the squadron, along with an explanation of how difficult it is to maintain a blockade with limited resources. The book has a good mix of familiar and new information (or at least it was new to me) and I found it an enjoyable read. There were a couple places where Reid seemed to repeat himself, making me wonder if parts of the book were printed as separate articles somewhere, but overall I liked the book and would recommend it.

For gamers, the book will have a limited appeal. If you are interested in the American - Tripoli War, this book will provide a lot of new information about the ships and men involved in the war, along with ideas for scenarios. If you have an interest in small-scale naval actions during the Age of Sail, the book could give you some ideas for cutting out operations, coastal actions, and other small scale battles.