Recalling the DANG Past

In my post Catching Up I mentioned that I was preparing for my yearly naval game, referred to as DANG (Dave's Annual Naval Game). Since I'm catching up on a few other things, I thought I would post a little information about previous DANG games.

DANG is a day-long (well really about 6 or 7 hours) naval oriented game and is typically a mini-campaign with several battles representing several days or months of a campaign. I get the ideas for the games from various sources, some printed and some just made up by me. One of my favorite sources was the old Naval Wargaming Review done by Nathan Forney. Naval Wargaming Review was a little gem of a publication from the mid-1990s covering naval wargaming in all forms (board games, miniatures, and even computer games) with scenarios, mini-campaigns, after-action reports and product reviews. It didn't have a very long run (I'm not sure if it lasted 3 years), but there was a lot of fun information for naval gamers. I've always hoped the Nathan would bring it back sometime (if anyone reading this knows Nathan, you should tell him to give it another go).

Here is the list of games we have played over the years, with a little information about each game. I don't have pictures for all of the games, but have included a few snapshots for those I do have.

2002: South Atlantic War 1982 This game used a modified version of the Lombardo’s Trident scenario from the Harpoon4 suplement The South Atlantic War. We used the Shipwreck modern naval rules and Figurehead 1/6000 scale ships to play out the battles. This game ended with UK victory, since most of the Argentinean fleet was destroyed (including Belgrano and 25 de Mayo).

2003: WWI Adriatic This campaign was from the Naval Wargaming Review game and covered the opening moves of WWI in the Adriatic with Austro-Hungarian fleet going up against the Italians, with a little British support. We used the General Quarters 2 rules with Figurehead 1/6000 scale ships. The Austro-Hungarians won this game with an early attack on an Italian port and later a night ambush of Italian battleship force, after which the Italians conceded victory. Nothing went right for the Italians in this game.

2004: Remember the Maine; the Spanish-American War in the Caribbean We used a modified version of the Strategy & Tactics game Remember the Maine for operational movement and David Manley's Fire when Ready rules and Panzerschiffe 1/2400 scale ships for tactical actions. In the game, both sides won some minor battles, but there had not been a decisive battle and things could have gone either way when we had to wrap up the game. This game was probably a little too ambitious and not enough people showed up to really run both sides effectively. ﻿
﻿2005: The Relief of Wake Island This game covered the attempt by US carrier and transport task forces to resupply the Marines holding out on Wake Island, while the Japanese divert forces from the Pearl Harbor strike force for a second invasion attempt. We used the General Quarters 1 & 2 rules with Figurehead 1/6000 scale ships. While it was touch-and-go early on, this battle ended in a clear US victory as the relief force made it to Wake and with one Japanese carrier sunk and the other damaged during the battle.
﻿﻿2006:Guadalcanal Nights This game covered the surface actions around Guadalcanal. This was another campaign from a Naval Wargaming Review issue and I believe it was the basis for The Solomons Campaign book from Old Dominion Gameworks. We used the General Quarters III rules (this was the first time many of the players had tried them) with Figurehead 1/6000 scale ships. This campaign was really too long for a one day event, but we still got through several battles. When we quit the Japanese had a small lead in points, but the game still could have gone either way.

﻿2007: 1973 Arab – Israeli War at Sea This was a campaign game of my own design, with the tactical battles being fought with David Manley's Bulldogs Away rules and 1/700 scale modern ships. The game results turned out pretty historical, with the Arab navies being basically destroyed by the end of the game, although the Israelis suffered higher losses than they did historically. ﻿
﻿2008: Disputed Territory This was a scenario from the 1997 Harpoon Naval Review covering a territorial dispute between Australia and Indonesia with neutral shipping roaming through the area. We used the Harpoon4 rules with Figurehead 1/6000 scale ships (and some nice scratchbuilt oil platforms). In the end the Australians won a hard fought battle. They completed their objectives and didn’t lose as many ships or aircraft as the Indonesians, but they still had heavy losses. The victory was closer than it would have appeared.
2009: Action off Tunisia This game covered the fights between German/Italian light forces and British/American coastal forces off the North African coast. This was another campaign of my own design. We used the Action Stations rules with 1/600 scale ships to fight the tactical battles. This was a very tight game, but the Axis players pulled out a slight victory in the end since they were able to get some vital convoys through the Allied gauntlet.
That gets you up to date on the DANG games. I'll being posting more about this year's game soon.

We had the NHMGS game day at the Museum of Flight in Seattle on November 6. I'm a little late in getting my report in, since none of my pictures turned out and I got a little busy during the week. Luckily Dale Mickel took a bunch of pictures and I've "borrowed" some for this post. You can see all of Dale's pictures here.

The 6th was a rainy day (so surprising for Seattle) so we were expecting a good number of visitors at the museum. We had a good turnout of NHMGS members (around 25 people), the information table was set up, and all the games were ready to go when the museum opened up.
During the morning session we had an air racing game (using my home brew rules), a 28mm World War II game, a 15mm World War II game, a World War I air game (using Wing of War), and DBA games going on. All the games drew viewers and questions from museum visitors. The Wings of War and DBA games even had a few visitors sit down and play some games.
﻿
In the afternoon, the DBA and 15mm World War II games continued, while a 20mm Spanish Civil War and 10mm World War II Tobruk game were added to the mix.
I spent most of the day at the information table, talking with the museum goers and generally making a nusance of myself.

﻿Overall, it was a good day for NHMGS at the museum. We had a chance to show off the hobby to the general public, play a few games, and everyone seemed to have a good time. We expect to be back next year (mark your calendars now).

A couple other NHMGS members (Kevin and Dean) posted their own impressions of the Museum of Flight game day and you can read them here: Kevin and Dean.

I should be returning to some naval gaming topics with my next blog post.
Posted by Dave S. at 8:35 PM No comments:

My favorite baseball announcer, Dave Niehaus, passed away yesterday. Dave was the primary radio play-by-play announcer for the Seattle Mariners from their first game in 1977 through the end of the 2010 season. 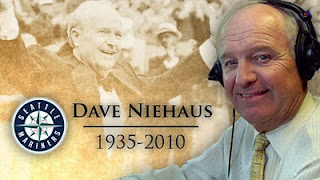 I'm not a native to the area and didn't grow up following the Mariners, but when I moved to this area and started listening to the ball games, Dave was the voice I associated with the Mariners. He was the one constant with the team.

For me Dave Niehaus became more than just a local baseball announcer, he was like a favorite uncle who would invite me over and then tell some great stories. During the summertime his voice would go everywhere with me, whether I was working in the yard or gaming with friends.

Dave did more than just describe what was happening on the field, he described everything that was happening at the game. He provided descriptions of not just the sights and sounds of the ballpark, but what it felt like to be there. He had this wonderful ability to draw you into the whole game experience making you feel like you were sitting next to him. He was truly one of the great storytellers and made you feel like you were part of his small select group of friends.

Dave always made it fun to listen to the game, even when the Mariners weren't very good, which was more often than not. He rarely complained about how the team played in the same way a normal fan would. But when a player (or the team) wasn't putting out their best effort he would say something, which was pretty rare for a team employed announcer.

For me his passing is really like losing a member of the family. Summer will not be the same without Dave Niehaus. Good-bye Dave, we will miss you.
Posted by Dave S. at 12:12 PM No comments: