It is one week away from DANG and I’m currently recovering from my planned shoulder surgery (I needed to have a tendon repaired and part of a bone shaved off), so this post was done by one-handed typing. The recovery time has given me the opportunity to read and re-read many books and I thought I’d share them here. The first two are naval books, while the last doesn’t really have anything to do with ships or wargaming, but was a good read. 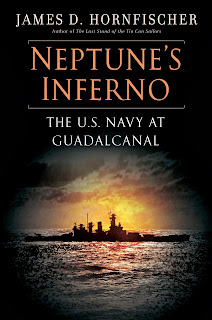 Neptune’s Inferno: The U.S. Navy at Guadalcanal by James Hornfischer
Hornfischer has done some really great work in his previous books of creating personal narratives about sailors at war and Neptune’s Inferno continues that habit. Unlike land combat, where the object is to kill/wound/demoralize enemy troops, naval combat is all about the ships. That is where most books concentrate their story, on the ships as objects of war while the men that crew those ships (except for the admirals and captains) often sit in the background, out of sight. While Hornfischer does talk about the ships in battles and what the admirals/captains were doing and thinking, he also takes you into the turrets and below deck to see what the other officers and sailor were doing.

The book also covers higher levels with accounts of Nimitz, Ghormley, Halsey, and the Marines on Guadalcanal. Hornfischer also touches on the Marines denouncement of the Navy for abandoning them, while also pointing out the Navy suffered three times the casualties as the Marines and adding several stories about positive Marine-Navy interactions.

Overall, Neptune’s Inferno is an engaging book with lots of good stories. While I would have liked to have seen more about the Japanese sailors too, that is a minor quibble and certainly doesn’t make this book any less worthwhile.

For gamers this book will make you want to pull out a naval game and play it. There isn’t a lot of new information here, but it vividly illustrates the chaos and command/control issues inherent in battles. It might even give you some ideas about throwing some chaos into your games. 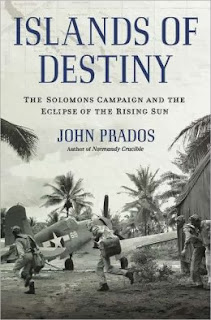 Islands of Destiny: The Solomons Campaign and the Eclipse of the Rising Sun by John Prados
John Prados starts out this book saying that he is out to show that the Solomons Campaign, not the Battle of Midway, was the real turning point during World War II in the Pacific. Prados goes through the list of Japanese forces available after the battle to show that while Midway was bad, it wasn’t devastating and that the Japanese forces were still on par with (or even slightly better than) American forces. The book goes on to cover the actions in the Solomons and the decisions behind the actions from both the American and Japanese point of view.

As far as his argument about Midway not being the turning point of the war, it is solid but I’m not convinced. I see his point, but (in my opinion) without Midway the battles around the Solomons don’t happen and the American turn to offense probably doesn’t happen until 1943. That said, I still enjoyed the book and highly recommend it, especially now that it is out in a paperback edition.

From a gamer’s point of view, the information on intelligence resources for the Americans and Japanese should prove valuable for setting up your own mini-campaigns/scenarios and knowing how much information to give the players. I know it already influenced what I’m doing for the upcoming DANG game. 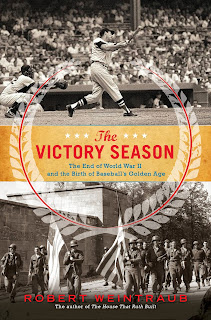 The Victory Season: The End of World War II and the Birth of Baseball's Golden Age by Robert Weintraub
The Victory Season is ostensibly about the 1946 baseball season, but there is really so much more to this book. Yes, it has a description of the season and exciting seven-game World Series, but it also has stories about what was happening in the United States in the year after World War II ended. It includes stories about labor unrest and the general shortages as the country shifted from a war-time to peace-time economy. It also has the account of Jackie Robinson’s year with the Dodger’s minor league team in Montreal.

There are stories about player experiences during World War II. Not just the experiences of the stars, but of the minor leaguers and players that would become famous. There is a story about an ETO ‘World Series’ played after the war ended in a converted Hitler Youth Stadium. The Victory Season also mentions Japanese ballplayers, many which served and died during the war. There aren’t too many books that talk about Japanese players and even though it is a short mention (around a page), it was nice to see.

The main things I liked about this book was the way it interwove the story of the baseball season into what was happening in the United States in 1946 and the wartime experience, not leaving each as a separate tale. The book skips back and forth a lot, making it seem a little disjointed at times, but overall it works. I picked this book as an e-book from the library and was really happy with it.

I was really happy to see the Figurehead 1/6000 scale ships when they came out many years ago. Figurehead had a lot of ships from different eras, the ships were very affordable, they were easy to paint, and it would let you do battles in something close to real scale. The line has a good number of American and Soviet Cold War ships (more than any manufacturer except NavWar) and the World War I and II lines were pretty close to complete. I ended up buying a bunch of these ships and they have been my ships of choice when doing larger scale actions.

As I mentioned in my previous post, I needed to get a few more ships and paint them up for this year's DANG. The main ships I was missing were some older Japanese battleships and some of the refitted American battleships and escort carriers (no one was sending the really new stuff to the Aleutians).

Here you can see the painted up Japanese and American battlelines, along with some other ships I've had for a while. I am still amazed at the level of detail on most of the ships (you can click on the images for a little closer look).
The new thing this year is mounting the ships on wooden bases to give players something to grab onto and to give me a place to put ship identification.

The biggest problem (or maybe it is the smallest) with the Figurehead ships is that they are pretty small. Even the big World War II battleships and carriers are less than 2 inches in length in this scale. While the small size does allow for bigger battles and a better representational scale, even the most knowledgeable sea dog would have trouble distinguishing a Japanese Fubuki class destroyer from a Kagero class destroyer, much less keeping track of individual destroyers. That is why I needed to have a way to identify the ships.

One of the first games I played with the 1/6000 scale ships was World War I in the Adriatic. While the game worked well with the battleships and cruisers, the tiny destroyers and torpedo boats were hard to maneuver and see, much less identify. I'm hoping that adding the bases will make it easier for players to move and keep track of their ships, while letting them know what the enemy has available.

I still like the 1/6000 scale for the larger actions, but there are times I wish I had all these ships in a larger scale too. If (when?) I do games where the largest ships are cruisers (and there aren't many of them), I will probably invest in some 1/2400 scale ships. But for now, the tiny little ships will do the job.
Posted by Dave S. at 9:35 PM 2 comments: