In preparation for the American Civil War DANG 2011 game, I've started to get together the ships needed for the game. I'm going to be able to borrow most of the ships needed for the game from the local ironclads buffs (Kevin, George and David), but I still wanted to put together a ship for the game. I will have to assemble some terrain for the game, but I always like to have at least one ship that I painted up on the table. I was able to talk Kevin into loaning me one of his un-built Thoroughbred Figures Cairo ironclad gunboats, so that I would have something to put together for the game.
First a little history. The Cairo class gunboats were ironclads used on the Mississippi River and its tributaries during the American Civil War. These are also sometimes referred to as City class gunboats, "Eads gunboats" or "Pook Turtles." The class was designed by James Buchanan Eads, a wealthy St. Louis industrialist who risked his fortune in support of the Union.

The seven gunboats in the class were named for cities on the Mississippi or its tributaries. They were: Cairo, Carondelet, Cincinnati, Louisville, Mound City, Pittsburg, and St. Louis (later renamed Baron De Kalb). The first four gunboats were built at the Carondelet Marine Ways (today part of St. Louis). This was a logical choice since the area had the dry dock facilities and was a machinery center and had a ready supply of skilled tradesmen to do the required work. Most importantly, since the gunboats were to be used on the Mississippi River, building them at St Louis meant that at completion, the boat could be quickly put into service. The three other gunboats were built at the Mound City Marine Railway & Shipyard facilities.

The Cairo class gunboats formed the core of the US Army's Western Gunboat Flotilla, which later was transferred to the US Navy and became the Mississippi River Squadron. The gunboats took part in almost every significant action on the upper Mississippi and its tributaries.

The Thoroughbred 1/600 scale Cairo class is a nice kit. Out of the box the kit has instructions, the main body for the boat, two smokestacks, four vents, three ship's boats (one large and two small), a brass wire for the flagpole and a paper flag. All the parts were cleanly cast and I didn't need to do much before starting assembly.
Putting the ship together was pretty easy (due to the limited number of parts), although I decided to leave the ship's boats off for the moment. The instruction sheet has some painting tips and lists the color bands used on the stacks to identify the different ships in the class. Here you can see my initial painting effort.
I was trying to get a lighter black on the hull (historically I believe those area were covered with creosote), but I think I might need to go back and dry-brush the hull with a grey or dark brown color to give it a more weathered look. The deck was painted a wood tan and the paddle box for the wheel was painted a dark brown. I touched up the guns with a deeper glossier black, but it is hard to see. I haven't decided if I will add the ship's boats or leave them off. My initial feeling is that the boats would have been left behind if the ship was expecting action (fewer things to cause splinters if hit or catch fire), so I'm leaning toward leaving them off. That way I won't have to worry about making davits for them.

I've also been thinking about adding a wooden "civilian pilothouse" on top of the armored one. There are several photos on the Navy History site that show ships of this class with the modification (the photo at the start of the blog is one of those). But, like the ship's boats, I wonder if it would have been in place if the ship was expecting action. If there is more than one Cairo class gunboat in the game, the wooden pilothouse would make this ship look a little different than others. But I guess that is what the stack color bands are for.

Comments on if I should include the boats and pilothouse are welcome (general comments are welcome too).

Over the past several weeks I haven't been working on much hobby stuff. I’ve mostly been helping my wife with outside chores to prepare for fall and winter, but here are a few updates on what is happening.

First off, I want to mention that the NHMGS (Northwest Historical Miniatures Gaming Society) Game Day at the Museum of Flight in Seattle is set for Saturday, November 12. 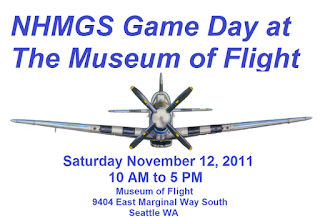 NHMGS has been running a game day at the museum on and off for the last ten years. It is always a good time and we are expecting around 20+ NHMGS members to be there to show the flag. If you are in the Seattle area on November 12, you might want to stop by the museum and have a look or even join in a game. You can find out more about getting to the museum at their website.

I haven’t got a list of all the games are being put on yet, but I think there will be some World War I air action and some DBA battles. As always, we will have an information table with reference books, rules, and miniatures on display.

Next, I am preparing for my yearly naval game: DANG (Dave's Annual Naval Game). This is DANG’s tenth year (you can see some recaps of previous DANGs here and last year’s game here) and we just completed voting for this year’s game. 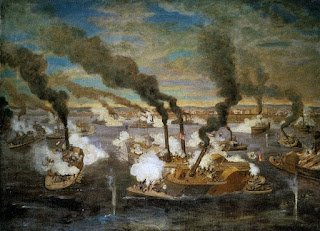 This year’s game, titled Up the River, is an American Civil War riverine mini-campaign. The game is based on David Manley’s Red River Blues solo campaign system for his Iron and Fire rules, with a few of my own modifications. The game probably won’t end up anything like the Battle of Memphis pictured above, but there should be some good battles. The basic premise of the game is that Union naval forces have heard a rumor that the Confederates are building and ironclad on a nearby tributary of the Mississippi River. The Union players must organize a force to move up river and destroy the ironclad. The Union players will only have a general idea of the river course and not much information on enemy forces (the ironclad might not even be real). The Confederate players will have to organize their defenses as best they can with the spread-out forces that are on hand. We are planning to use the new Steam and Sail Navies rules (from Bay Area Yards) and 1/600 scale ships. Several of the DANG participants already have ships, so I might not need to buy any new ships for this year’s game.

That will leave me time (and money) to work on my Age of Sail stuff and missile boats. I’m currently cleaning up some old Minifigs sailors, that I got off eBay, and some Thoroughbred Figures Tripoli Pirates for painting.
Posted by Dave S. at 9:48 PM No comments: