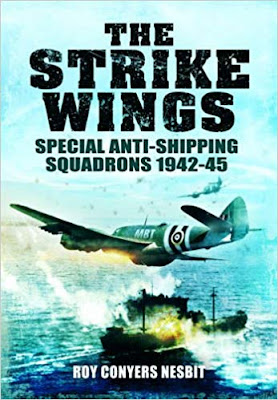 The Strike Wings tells the story of Coastal Command’s three anti-shipping strike wings during World War II. The strike wings were formed in 1942 to attack German coastal shipping off the Dutch and Norwegian coasts to disrupt shipments of iron ore and other minerals vital to the German war effort. Coastal Command had made efforts to interdict this traffic from the start of the war, but it wasn’t until the Beaufighter Mk VIC and torpedo armed “Torbeau” version became widely available that they had a plane that could effectively handle the job.

The Beaufighter was originally designed as a heavy fighter variant of the Bristol Beaufort bomber. Early versions were used as long-range fighters and night fighters (which were equipped with air intercept radar). The Mk IC version was modified for Coastal Command use, with additional fuel tanks and hardpoints for bomb mounts. The Mk IC version was deployed to the Mediterranean and proved effective in attacks against Axis shipping and ground targets. This led to the development of the Mk VIC version and the formation of strike wings.

The book covers some of the early developments of the strike wing attacks and tactics. Including discussions about the anti-flak and fighter work, along with the development of rockets which would become the weapon of choice for the strike wings. There are several maps that show the location of ships and how attacks were carried out. The book also talks about the formation of the Banff Strike Wing, which used the De Haviland Mosquito Mk VI as its strike aircraft.

In addition to going after convoys, the strike wings were also hunted U-boats and other German navy ships. Around the D-Day period, one wing was tasked with protecting invasion and post-invasion shipping from any interference by the German navy. The book has some nice discussions of these operations.

In addition to mission accounts, the book also has an appendix showing the airfields where the squadrons were deployed and one that lists the ships and submarines that were damaged or sunk by strike wing attacks. The author used the German records to match strike wing claims against actual losses, although the list does not include convoy escort vessels that were damaged in the attacks.

The author flew in strike aircraft of Coastal Command after World War II and was able to speak with many strike wing veterans. The descriptions of attacks are supported by first-hand accounts of the action from the aircrews involved.

The Strike Wings provides a good overall history of Coastal Command's strike wings. The action described in the book is very different from the bomber and fighter battles over Europe and in the Pacific. I would recommend it to anyone interested in World War II aerial combat.

From a gamer’s point of view, the book provides a lot of information and ideas for scenarios. The maps and appendices provide good information on potential game set ups and the forces involved. The Beaufighters and Mosquitos of Coastal Command’s strike wings attacked a variety of shipping targets and sometimes had to fight off German fighters escorting those ships, so there is a lot of interesting action.