I was getting ready to make a summer plans post, when I realized I hadn't put up any photos of the ships I mentioned in my April Work In Progress post. So here are some photos of the completed 1/600 scale merchants, along with a Hunt II escort destoyer that I recently completed.
As I mentioned in the April post, the ships are part of Heroics and Ros 1/600 scale coastal forces line (which is really the old line from Skytrex). The Hunt II is the HMS Badsworth kit from B Resina that I picked up several years ago. Here are some water-level photos of the ships.
The ships look good for gaming, although I am not really happy with how the weathering turned out (adding rust, grime, etc.). These ships will serve double-duty for me as targets for air attacks and in coastal forces games. Together with Kevin's ships, we can field a nice sized convoy.

Summer Plans
With summer in full-swing, my gaming time is pretty limited (which is often the case for my gaming opponents too). Over the next few weeks I'm planning to re-base some painted American Civil War figures for the Rebels and Patriots rules and then I'll look at what other items to get on the work table.

Additionally, I'll play my annual Summer Solo Game. I skipped the solo game in 2018, but past years have seen me solo-play Operation Battleaxe, Silent Victory, and Tokyo Express during the summer. This year I'm taking London's Burning up for a spin (I almost chose the VASSAL only game The Tonnage War, but decided to go with the air game). 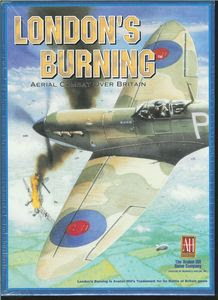 London's Burning, originally published by Avalon Hill in 1995, is a solitaire game where you control a couple RAF fighters during the Battle of Britain. I'll be using the VASSAL module so that I don't have to worry about putting out and picking up the game (it also makes for better images for posting on the blog). I'll play the standard scenario, which runs from August 13 thru September 6. If things play quickly, I may extend to the long scenario which runs until September 15. Tally Ho!