Book Review - In the Hurricane's Eye 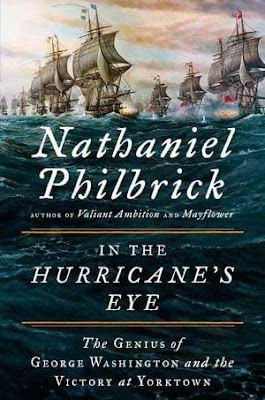 In the Hurricane's Eye, The Genius of George Washington and the Victory at Yorktown is the final book in Nathaniel Philbrick's coverage of the American War of Independence (the previous books are Bunker Hill and Valiant Ambition).

The book starts out talking about the three major hurricanes that happened in October 1780. These hurricanes ravaged the Caribbean and Gulf of Mexico. The worst storm had winds estimated at 200 miles per hour, killed over 22,000 people, and damaged or sank British, French, and Spanish warships. These storms give the book its title. Philbrick goes on to talk about the current situation for both sides of the war and the importance of ships for movement and resupply, setting the stage for the rest of the book.

The next event covered is Benedict Arnold's (now serving in the British Army) attack into Virginia along Chesapeake Bay. George Washington sends the Marquis de Lafayette with a small army to oppose Arnold. Washington also talks the French into committing their fleet to try to trap Arnold. The Royal Navy catches wind of the French fleet's movements and races to intercept them, leading to the Battle of Cape Henry. While the French are unable to move into Chesapeake Bay, they do major damage to the British fleet and Philbrick suggests the French missed a chance to change the war here.

The book then moves to the British Army's campaign in  South Carolina and North Carolina. It covers the battles of Cowpens and Guilford Courthouse as General Cornwallis moves the British army north into Virginia. With the British settling in around Yorktown, the American and French saw an opportunity to trap Cornwallis.

At this point in the war, Washington was still hoping to retake New York from the British. However, the French generals and the strength of the British position around New York City finally convinced Washington that taking on Cornwallis was the best course of action. So, the combined armies headed for Virginia. But they still needed the French fleet to prevent resupply or evacuation of Cornwallis' army. While the allied armies raced toward Yorktown, the British and French fleets were racing to get into position at Chesapeake Bay.

With the British sealed up in Chesapeake Bay, the book moves to the siege of Yorktown. The overall action is described, along with the final decision to surrender. This essentially ended the fighting in North America.

The remainder of the book follows up on the final resolution of the revolution, the troubles in the American army and Washington's efforts to keep the American army in line. The book ends with a chapter that gives a short description of what happened to each of the main characters in the story.

Overall, In the Hurricane's Eye is a good general history of the last years of the American Revolution. It does a good job of describing the situation, the personalities involved, and the events. The book is easy to read and I would recommend it to anyone with an interest in the American Revolution, although you might want to start out with Philbrick's Bunker Hill and Valiant Ambition.

For gamers, the book provides you with information on the major battles, especially the sea battles, for putting together some interesting scenarios and alternative battles. But you will probably need to go to other sources for more details on the troops and ships available at the time.

As the calendar turns to 2019, I will jump on the review/preview bandwagon and take a quick look back at 2018 and forward to 2019. 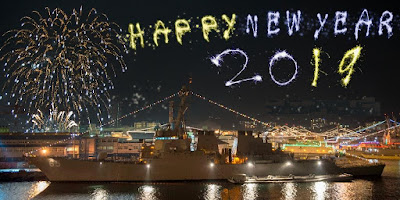 Before I start that, I again want to thank all of you that regularly (or not so regularly) read my blog. I’m not always good about posting, but I really appreciate your views and comments about what I'm doing. So, thanks for reading.

I had limited goals for 2018 and not a lot of new projects showed up during the year. The early part of the year was taken up with work on the two joint games with Kevin for Enfilade 2018. First up was the Illustrious project, which covered the air attack on HMS Illustrious on January 10, 1941 during Operation Excess convoy to Malta.
Overall, I had a good time with this project. It was fun to go through the research, find the appropriate ships and aircraft, and paint up the ships. I think the playtests and Enfilade game went well. This was definitely a successful project.
Next was the Falklands - Attack on San Carlos game. This was an easy project that really only required me to clean up my Falklands models and come up with a challenging scenario. I worked through a lot of options for the game and I felt like the final scenario gave both sides enough choices to make the game interesting. As with the Illustrious game, I think the game played out nicely at Enfilade.
After Enfilade, Kevin and I settled into painting planes for a semi-successful Malta air war project. We both painted up a number of aircraft (although mine started shifted to the Western Desert) and played a few (but not enough) games.
During summer, I had the chance to play some Song of Drums and Tomahawks, What a Tanker, and some solo naval action for International Naval Wargaming Day.
After summer, there was the NHMGS game day at the Museum of Flight and DANG. Both of which went well.

Looking back on 2018, I didn’t get much done in the way of other projects. I’ve got number of figures and ships that are partially completed, so I’m a little disappointed I didn’t finish those. On the brighter side, I did more blog posts this year than I have since 2011. I also picked up a Cruel Seas starter set, which gives me a few ships to put together, but I’m not sure how far I will get into the new larger coastal forces scale.

Overall 2018 was a good year for gaming.

As with 2018, I’m still a little short-handed at work and expect work to suck up a lot of time. So, I’m not anticipating a lot of extra time for projects and will keep my expectations low.

Kevin and I are planning a couple air games for Enfilade using David Manley’s unpublished Air War 1940 rules (which reminds me that I need to send some more play notes to him). The first will be a revamped version of the attack on Tirpitz game from 2013 and the second will be an air battle over Malta, revising and improving some of our 2018 games. Because most of the ships and planes for these are already done, they should be fairly easy projects.

For other projects, I would like to get back to my modern submarine rules and let a few people look at/comment on the rules and ideas. I’m considering running a rule playtest game at Enfilade this year to get me motivated again.

I also want to focus on finishing up some half-finished projects (Western Desert air war, Lion Rampant Muslims, etc.), along with some coastal force stuff (yes, I’ll do some Cruel Seas stuff).

Other Odds and Ends – I want to get in more face-to-face gaming this year, so that might take priority over some of the half-finished projects. As usual, DANG will take up the last couple months of the year and since I let the gamers vote on the project, it is hard to know what it will be. I’m also sure there will be some other new, bright, and shiny game/object that will take my attention.

Overall, nothing to tough or strenuous is planned for 2019, which should make it easy to meet the goal.
Posted by Dave S. at 5:48 PM 4 comments: