Illustrious Project - Out of the Yards

HMS Illustrious has completed her time in the yards and is ready for action. I finally put the finishing touches on the carrier’s paint job and got it in place for a few photos.
As I mentioned in my previous Illustrious post, the colors are light grey hull, with a medium grey disruptive pattern, and a dark grey deck with a solid yellow stripe. Here are some comparison photos of my version compared with the schemes from Mal Wright’s book. 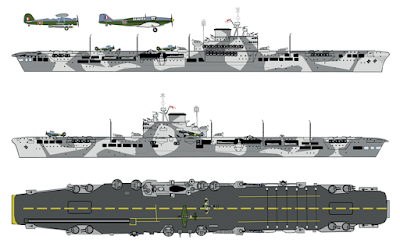 Overall, I’m happy with the paint job and how it compares to the illustration. Although my attempts at adding some weathering don’t seem to show up in the photos. But I guess that is a fairly minor problem.
I should have finished the carrier a while ago, but I've gotten behind on some projects for work and others. I often seem to take on more things than I really should. But next up for this project will be an escort for the game.

Kevin came up with some unexpected free time yesterday, so we decided to try a walk-though of the rules we are going to use for the Illustrious project. I don’t think I’ve mentioned this before, but we are planning on using David Manley’s unpublished Air War 1940 rules for the game. Since Illustrious is still in the paint shop at the yards, but Kevin had received a game mat of Valletta and Malta’ Grand Harbor for Christmas and it seemed like a good opportunity to break it in. So, we decided to try out the rules with an air raid on Malta’s Grand Harbor. The mat is from Tiny Wargame Mats and really looks nice. We even added a few ships from Topside Miniatures to provide some targets for the bombers. 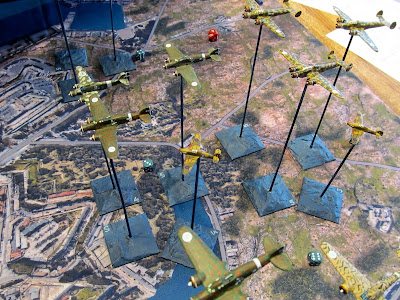 We’ve played several games using Air War C21, so we are familiar with concepts behind the rules. But, there are some differences in the rules too, so we decided to go with intercepting an unescorted bomber raid. We pulled out 12 Italian bombers (9 SM.79s and 3 CANT Z.1007s) for the attacking force and some Hurricane Is and Fulmars. along with a little flak, on the intercepting side.
The bombers basically moved straight, with some minor turns to line up on their targets, at max speed. The interceptors started out in front of the bombers and needed to do a little maneuvering to get in good firing position. The Hurricanes were easier to manage than the Fulmars, being faster and more maneuverable.
British attack rolls during the game weren’t great. The Hurricanes did manage to cut through the Italian formation, getting hits on several bombers. But due to their light caliber weapons and less-than-average die rolls, they were only able to down one bomber. The Fulmars had similar results but crippled a bomber instead of knocking it down. The heavy flak also had mixed results, getting one hit early on that crippled a bomber, but missing all chances after that.

The Hurricanes eventually ran out of ammo and the Fulmars fell too far behind after missing rolls for special maneuvers, so we ran the remaining bombers through their attack.
Much like the British shooting, Italian bombing rolls were less than spectacular with no hits recorded.
Overall the test game was successful, even though the rolling was poor. The Malta mat looks great and will provide us with a good mat for playing the “Illustrious Blitz” some time in the future.