David Manley has launched the first International Naval Wargaming Day to celebrate the birth of naval wargaming. It is scheduled for this Sunday, August 6th, which is also the birthday of Fred T. Jane, creator of Jane's Fighting Ships. 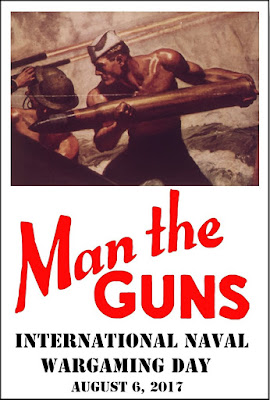 As a big naval wargamer, I’m happy to throw my support to the cause and help spread the word.

First up, here are links to more announcements about the day:
While I don’t think I’ll be able to organize a game with friends, I’m sure I can get in some solo gaming to celebrate the day. Although, I might lobby for September 27 (Alfred Thayer Mahan's birthday) as an alternative date for the celebration.

The scenario generation roll gave the standard randomly generated scenario and my force was 5 destroyers and 4 cruisers (I picked 3 heavy cruisers and 1 light cruiser) and I had early SG type radar (which really helped out). I set up my forces and set out to find the Japanese near Savo Island. If you have played Tokyo Express, you know that there are a lot of random elements in the game, which makes it really hard to put together a good solid plan. My basic idea was to roam around Iron Bottom Sound between Savo Island and Guadalcanal, trying find the Japanese.

I was lucky in that a lot of the Japanese Force draws turned out to be nothing. But mid-game I got the drop a pair of Japanese destroyers before they saw me (the chit draw was US Detection followed by Combat) and I was able to sink one and cripple the other before they had a chance to return fire.

With July here, I am mapping out my plans for the rest of the summer. I’ll have my usual slow-down for summer yardwork (I don’t really enjoy the yardwork, but it is my repayment to my wife for all the time I spend on hobby and other fun stuff), but I still have a few gaming projects planned for the summer.

On the miniatures side, I’ve been working putting together my 1/700 scale modern Japanese missile boats and Chinese frigate. I have pans to use these models, along with the fishing boats that came in the same box as the Japanese ships, with naval (Bulldogs Away rules) or air (AirWar C21 rules) games. I’ve had the models for a while and it will be nice to have them done. I’ll get some pictures of these up when they are completed.
As with the past two years, I’m planning some more solitaire gaming this summer. This year I’m pulling out my copy (and a VASSAL virtual game) of Tokyo Express. I’ve had this game for a long time, but it has been a while since it has been on the table. I’m going to use the campaign out of The General Volume 28 Issue 5 as the basis for the game.
I’ve also been playing the new Cold Waters computer game. It is basically an update and reimagining of the old Red Storm Rising computer game by the team that did Pacific Fleet and Atlantic Fleet. You get to command one U.S. submarine during World War III, so the scope and play are very different from the company's Fleet games. I like the game, it is pretty fun and true to its roots.
I have a few other ideas waiting in the wings as time permits. I’ll share those as they come up in the queue, but this is a good start for summer.
Posted by Dave S. at 8:04 PM No comments: