On Saturday the lawn gaming group got together for a little pre-dreadnought action using the Fire When Ready rules (with some modifications to make the crusiers last a little longer). The scenario was Battle of Tangier (Perdicaris Alive or Raisuli Dead) from the Admiralty Trilogy Monroe's Legacy scenario book, with some slight alterations for available ships. The scenario is a hypothetical action where the Perdicaris Affair turns into a battle. It pits the Spanish (with the battleship Pelayo, a couple armored cruisers, and some other cruisers) and French (3 battleships and an armored cruiser) against 3 American squadrons (2 groups of armored/protect cruisers, one with some gunboats, and the last with 3 battleships and an armored cruiser). The initial set up placed the Spanish facing off against one American squadron near Tangier, while the remaining ships were entering from the board edges. The forces were pretty even. The victory conditions were basically to do more damage to the enemy than your forces took. Although the Spanish had a bonus victory condition where they wanted to sink the American cruiser Olympia as revenge for the Battle of Manila Bay. There was also a special rule that the Americans could not fire on the French until the French had fired on an American ship. With the ships in place and a quick review of the rules, we were ready to start.

The game started with the Americans and Spanish blasting away at each other (including starting a raging fire on Spanish cruiser), while the other squadrons moved onto the board.

The French  took advantage of the scenario special rule to fire on the American battleships without taking return fire. The initial shots were on target and started fires on battleship Kearsarge and armored cruiser Washington.

The Americans did get to return fire later, hitting the battleships Jena and Charlemagne - starting a fire on Charlemagne. There were a lot of fire special hits rolled during the game, so you will see lots of flames on the table.

The smaller Spanish cruisers and American gunboats were soon taken out of action. The Spanish also attacked the third American cruiser group, composed of the cruisers Olympia, Baltimore, and Cleveland. The Spanish focused gunfire on Olympia, doing some damage and starting a fire.

The French continued moving toward the center of the table and became the focus of fire from most of the American ships. But the damage was not one-sided. French gunfire added more damage to the American battleships and combined French and Spanish fire disabled Olympia, Baltimore, and Cleveland.

The above photo shows the American armored cruiser Washington falling out of line and on fire. Washington was hit by the first French fire; the crew couldn't put out the fire or repair a steam line rupture special hit, so the ship couldn't keep up.

The American armored cruiser Brooklyn tried to make a run for the board edge, but was caught in the middle of the French and Spanish forces and sunk.

At this point we decided to end the game. The Spanish had lost 4 out of 7 ships and the battleship Pelayo was heavily damaged. 2 French battleships were moderately damaged (and on fire) while the other battleship and armored cruiser had light damage. The Americans lost their gunboats and cruisers, but the battleships were still in good shape. Looking at all the damage, we called the scenario a draw, although the Spanish got a morale victory since the cruiser Olympia was sunk.

With fall here in the Pacific Northwest, this may be the last lawn game of the year. If this is our last 2021 outdoor game, it was a good one.

The U.S. Labor Day long weekend has arrived. I had mention in a previous blog post that the NHMGS Enfilade miniature gaming convention had been shifted to Labor Day weekend. Enfilade is normally one of the big yearly events for me (as you can see in these older posts) and usually I would have been busy preparing games and off to the convention. But this year some health issues have kept me away from the convention. So instead I invited some fellow misanthropes (okay, not really, they were just guys who couldn't make it to Enfilade either) over for a What a Tanker in the desert game.

This time around we were using tanks from around the time of the Gazala battles. The British started out with a Grant, Honey, and Crusader II.

The terrain had hills, rocky outcrops, and some scrub brush. So there were places to hide (although maybe not enough) and that blocked line of sight.

The Panzer IV was a little more exposed. It took hits that reduced its command dice and was eventually abandoned by its crew. I was trying to move up on the British without exposing myself too much, but that wasn't helping the Panzer IV.
After losing the Panzer IV, we brought on a Semovente 75. Initially it shrugged off the British shots, but one set of bad die rolls let to a quick kill on the SP gun. That gave the Axis side two tank losses to none for the British.
The second Panzer III had been hiding out in the scrub, using it for cover. It was finally able to draw a good bead on the Crusader and destroy it.

The British replaced their loss with another Crusader and the Axis brought in an Italian M13/40. Overall, things were still looking good for the British.

I decided to push forward, hoping the other tanks could cover me. This would put my Panzer III into direct confrontation with the Grant. Meanwhile, the Honey tried to move around my flank. Over the next couple of turns both sides would get hits, but the target rolled for saves against the hits. Then the M13/40 got around on the Honey's flank and blew it up. My dice got hot and I did the same to the Grant.

At this point we decided to end the game with the Axis getting a slight win.

While this didn't really make up for missing Enfilade, it was a fun time. It also gave me a chance to play with my new What a Tanker dashboards from Dark Ops. 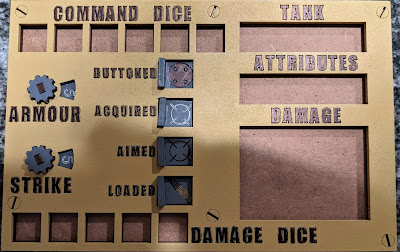 I did mine up in desert colors to fit my tanks. I still have a few more to put together and may vary the scheme a bit.

On a side note, you can see some photos from Enfilade (along with the normal posts of Dean's nicely painted miniatures) over at the WAB Corner blog.