Book Review - The Earth is Weeping 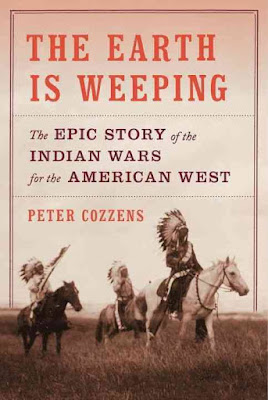 The Earth is Weeping: The Epic story of the Indian Wars for the American West is a one volume history of the Western American Indian Wars. This book covers a lot of ground and while author Peter Cozzens does not go into details for all the events, he does include and talk about all the major events.

The book starts out in 1861 with the Dakota Sioux uprising and goes on to cover Red Cloud’s War, the Modoc uprising, battles in Apacheria with Cochise, the Battle of the Little Bighorn, the pursuit of the Nez Perce, the pursuit of Geronimo, ending with the Ghost Dancers and Wounded Knee.

Because the opposing forces involved are small, when compared to most long wars, Cozzens is able to provide enough detail on to keep things interesting. But overall, Cozzens writing style is more text book and history than sweeping colorful epic. That said, the book does provide insight into what the different Indian tribes, leaders, and generals were thinking during each of the conflicts.

The western Indians never really united to oppose the white settlers and soldiers. There were times they formed temporary alliances, but mostly they continued to make war on each another, while some joined with the soldiers against tribes that were old enemies (Apaches often scouted for the U.S. Army against other Apaches and several Plains tribes worked with the Army).

Cozzens does a good job of showing the rivalries between tribes, Army generals, and even the United States’ Indian policies. He clearly talks about the injustice of broken treaties, but he also covers abuses by Indians against settlers and other tribes.

At the beginning of the book Cozzens says that he wrote the book to try to bring historical balance to the story of the Indian wars and I think he succeeded. Overall, the book provides good coverage of the American Indian Wars and ties them together, and I would recommend it. However, if you are looking for detailed accounts of a particular campaign, you might want to look for a specific book on the campaign.

For gamers, this book can provide a lot of scenario ideas, names, and places for Indian War battles. But it won’t give you a stirring narrative to build battles around. For that I would suggest some John Ford movies.