One of my joint-projects for Enfilade 2018 covers the air attack on HMS Illustrious on January 10, 1941 during Operation Excess convoy to Malta. Illustrious was a thorn in the side of the Axis, having participated in several operations including the attack on Italian battleships at Taranto. Operation Excess was well planned, but so was the German and Italian response, including plans to sink Illustrious. The Germans had recently deployed X Fliegerkorps with over 40 Stuka dive bombers. The basic plan was to use Italian SM.79 torpedo bombers to draw off the Royal Navy fighters and then let the Stukas go after the carrier and other ships. Historically, that plan almost worked. The Italians drew off a number of Illustrious' Fulmar fighters and the Stukas got six direct hits on the carrier.
While Illustrious was severely damaged, her armored flight deck held up and she was able to limp into Malta. The website Armored Aircraft Carriers of WWII has a good article on the overall action.

After getting to Malta, the carrier (and island) were subjected to numerous raids, which are often referred to at "The Illustrious Blitz."

As part of the joint project, my friend Kevin will be painting up Stukas, SM.79s, and Fulmars, while I take care of the ships for the game. We decided to limit the ships to the carrier and one escorting destroyer. I already have the kit for Illustrious and the kit for the selected destroyer is on the way.

I always like to get the paint schemes as close as possible and my research on the camouflage scheme for Illustrious turned up the following, from Mal Wright's British and Commonwealth Warship Camouflage of WWII, Volume 2, Battleships and Aircraft Carriers.
The colors are basically a light grey hull, with a medium grey disruptive pattern, and a dark grey deck. But it seems that the dotted yellow stripe had been replaced by a solid one by January 10.

I've assembled my Aoshima version of the carrier, adding some extra 20mm guns to round out the anti-aircraft gun fit for the time. I also put the large radio antennas in the down position (the assembly instructions for British carriers often tell you to assemble these in the up position, but my understanding is that they were lowered during flight operations. So, my version has them down as the crew rushes to get a few more Fulmars airborne).
Hopefully, my paint job will turn out like the pictures.

I’ve been intrigued with the Spanish Armada for some time. There are a number of interesting books and games available on the subject and I have some Armada boardgames, but I’ve always been little reluctant to get into gaming the era with miniatures. I decided to spend a little Christmas gift certificates to get a copy of the Spanish Armada book in the Battle of Britain series of book-games.
Each book in the Battle for Britain series, there are seven all-together (and they are launching a Fleets in Profile series this year), covers a different war in British history. Each include profile illustrations of soldiers and weapons to cut out, along with easy to play wargame rules. The Spanish Armada book has all the major ships you need to recreate the navies that clashed in the English Channel in 1588 and has instructions on how to cut out and assemble them. It also includes a coastline, islands, and a sea surface with squares for playing the game. The rules are quick and easy to play, but still show the differences between Spanish and English ships and tactics. The book also includes short descriptions of the overall campaign and the different ships on each side, along with tactical suggestions for ship captains when playing the game. There are six scenarios in the rules (four historical, one hypothetical, and one generic) and a campaign game. So, there is really a lot packed into book.
To start a game, you need to have your play area and ships, along with some six-sided dice for combat and a deck of cards for determining the wind information. The turn sequence for the game is Spanish move and shoot, then the English take their turn and can move and shoot or shoot and move. Movement is pretty basic with most Spanish ships only able to move one square, while most English ships can move two. If you are playing with the Orders rule, you roll a die at the start of the turn to determine how many ships you can move. There are also movement limitations based on the wind speed and direction (determined before the start of play). One interesting rule is that the Spanish transports don’t normally move during the game; they only move if they are hit by English gunnery. This does make games more fun that just doing the typical stern chase.
The movement information, damage and gunnery information for each ship type is summarized on a card.
For gunnery combat you roll a number of six-sided dice based on the firing ship type and range, with sixes being hits. When ships take enough hits, they become crippled and no longer move and can be forced to surrender. The English automatically reload their guns when they move, while the Spanish roll to see if they reload their guns. So, the Spanish have to think about when to fire their guns. There is also a rule for Spanish boarding (the English cannot initiate boarding). But a Spanish ship has to be in the same square as an English ship to try this and that isn’t very likely.

The campaign plays through a series of scenarios as the Armada moves through the Channel giving each side options for attacking the enemy (including a chance for the Spanish to attack ports or invade from Flanders). There are chances to resupply and repair your forces between battles too.

I haven’t cut out any ships yet, but I did play a couple battles with some stand-ins and the game played quickly and smoothly. There is a rules summary sheet, which I referred to when first getting started, to help with any basic questions.

The Spanish Armada book gives you ships, easy-play rules, and a basic history all a comprehensive little package. The author also gives you permission to copy the pages, so that you don’t have to cut up the book. Overall, I was pretty happy with the game and think this is a worthwhile purchase.
Posted by Dave S. at 9:27 PM 8 comments:

With the run of the calendar to a new year, it is time to take a quick look back at 2017 and forward to 2018. Before I start that, I again want to thank all of you that read my blog on a regular (or not so regular) basis. I really appreciate the views and comments about what I'm doing. So, thanks for reading.

I had limited goals for 2017 and only really finished a portion of those. The early part of 2017 was take up with work for Enfilade and I knocked out two planned projects: 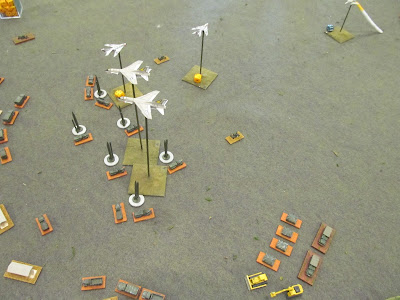 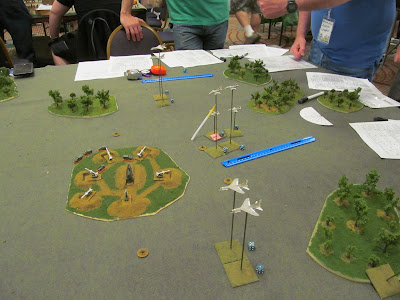 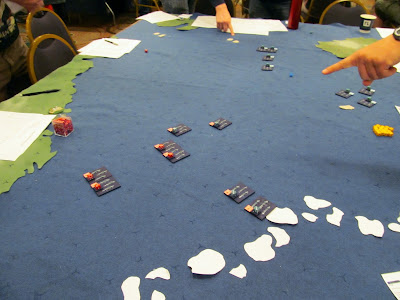 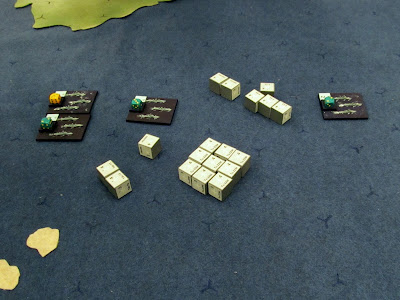 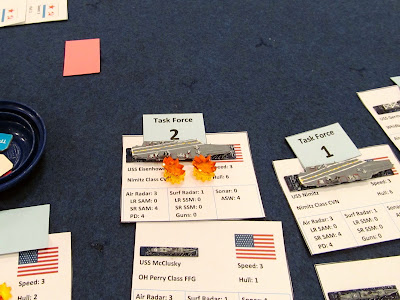 I felt like both Enfilade projects were successful. The games went well and it seemed like the players had a good time.

For non-Enfilade projects I planned to:
Finish my Chinese Navy Type 054A frigate and some Japanese missile boats.
I really procrastinated on these, starting and stopping them throughout the year. The kits are basically done, except for some touch-up paintwork, putting decals on the frigate, and basing the missile boats. So, I feel like this rates an 80% completion.

Work my modern submarine rules. This was pretty much a failure for the year. I tinkered around the edges, but I had a hard time getting into the final work on the rules. Hopefully, I can change that in 2018.

What else did I do? I did my usual summer solo project, which I combined with International Naval Wargaming Day, but that didn’t require any modelling or painting. I pulled out my Falklands models and painted up some Sea Harriers for the NHMGS Game Day at the Museum of Flight. 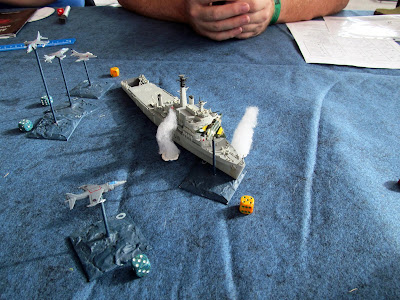 I also spent more time playing around with some computer games in 2017, with Cold Waters and Twilight Struggle being the main culprits of sucking up free time.

Overall, it wasn’t a bad year. Although I didn’t get in as much miniature and face-to-face gaming as I would have liked, but it wasn’t bad.

Looking ahead to 2018, I’ll be working with Kevin on a couple joint Enfilade projects for the Falklands (this will be an improved and polished version of what we did at the Museum of Flight) and the attack on HMS Illustrious in January 1941. I've got an old Aoshima version of the carrier ready to put together and I'm looking at what paint job she had in early 1941.
I’m also going to look for an Enfilade game to run by myself, but I will probably just recycle an old project for the game.

Based on discussions with some other gamers and other things I’ve got on the back burner, it seems like 2018 will be more air oriented for gaming and side projects. But there are a couple other things that are on my list.

I would like to get back to my modern submarine rules and let a few people look at/comment on the rules and ideas. I just need to figure out something to get me motivated again.
I also decided to get some figures for some Crusades era Lion Rampant armies. I’m going to start with the Muslim/Turkish army. I picked up some boxes of Gripping Beast plastic figures and, using the sample retinues from Lion Rampant, I figure I can cover the Seljuk Turks, Spanish Muslim, and Egyptian armies. I’m a pretty slow figure painter, so we’ll see how it goes.
Other Odds and Ends: I’m hoping to get in more face-to-face gaming this year, so that might take priority over some of the non-Enfilade projects. I’m also sure there will be some other new, bright, and shiny game/object that will take my attention. Looking far into 2018, I expect DANG will take up the last couple months of the year and since I let the gamers vote on the project, it is hard to know what it will be.