As I mention in my previous post, I ordered a few items from Shapeways and now that they are here, I thought I give a short review of the figures.

First up is the Chinese Navy Type 056 (NATO name: Jiangdao) class corvette. This is the 1/700 scale version from the Objects May Appear … shop.

I was actually quite pleased with how the ship turned out. I was worried about the graininess of the basic white strong & flexible material, so I selected a white polished strong & flexible material for the ship and was happy with how smooth it turned out (Chris had posted on a comment on the previous post saying that he thought I would like the polished material and he was right). The model is very similar to a standard injection molded plastic model with a hollowed out bottom (I didn’t take a photo of that part, but I think everyone will understand what I’m talking about). The forward deck does have some stair-stepping from the printing process. It is hard to see in the photos and might not be very visible once paint is applied. But I think I will try to sand it down a little (although I have read that this material doesn’t really sand very well). That said, I think it will really match up well with my other 1/700 scale plastic and resin ships. 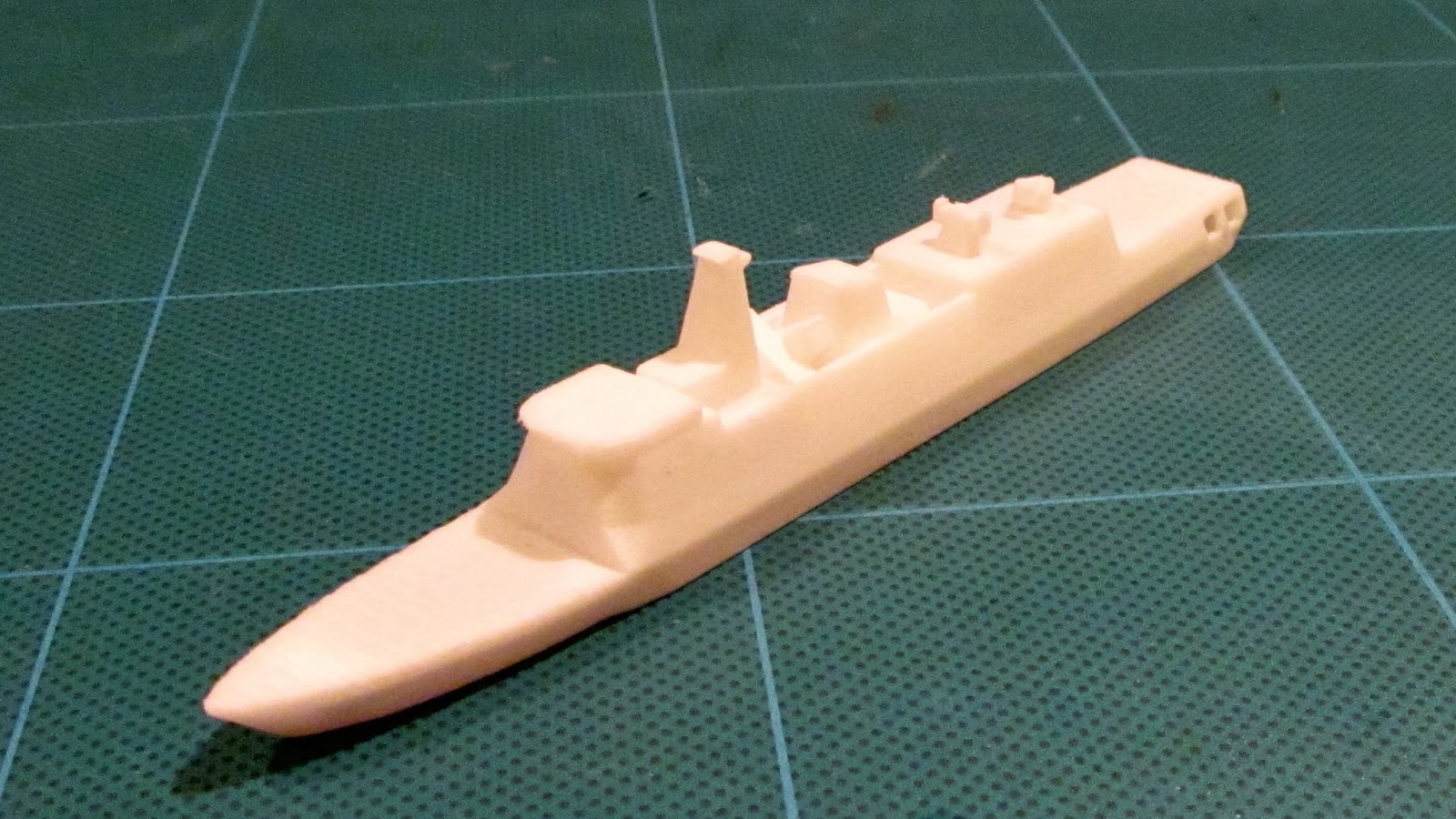 So, how does the model compare to the real thing? It is pretty close in size – most websites say the Type 056 is around 90m long (although none of them clarify if that is maximum length or waterline length), which would work out to 12.85 cm in 1/700 scale and the model comes in around 12cm.
There are some minor details missing from the model (no forward bulwark, no gun, the mast is missing details, etc.), but the general shape is good. As you look at the profile view, moving forward to aft, you can see that deck for the fire control radar (just aft of the bridge) is too short, the mast is straight instead of bent, the exhaust cover is too far forward, the aft superstructure does not meet the exhaust cover, and while there are holes under the helicopter deck on the sides, there aren’t any in the rear of the ship. I actually think that the part of the problem with the layout is that the helicopter deck is too short and that you could move the whole aft superstructure forward to meet the funnel, lengthening the helicopter deck, and it would be about right.

From the overhead, you can see a couple other problems. The area around the mast goes all the way to the sides, instead of tapering in and leaving room for the 30mm guns. From the top you can also really see how the connection between the aft superstructure and exhaust cover is missing.
With all this in mind, I think it is still a good model and it is one that no one else is making. I will be adding some details (the 76mm gun and mast details) and I might extend the aft superstructure. The amount of work I do will depend on how easy it is to glue stuff to the polished material.

The other items I ordered were 1/144th scale 1930s air racers from the Arctic Skunk shop. My friend Kevin has a bunch of these and you’ve seen photos of his planes from our air racing game. I ordered these with the basic white strong & flexible material and they do have a somewhat grainy texture. I also understand that this material really soaks up the paint, so you need to prime the planes really well.

The three planes I got are the Howard DGA-4 “Ike”, the Hall Bulldog (a favorite of mine, even though it was a poor racer), and the Laird Super Solution. I really like these planes and I’m looking forward to painting them up. Although, I think I will work on the ship first.