2018 NHMGS Game Day at the Museum of Flight

This year NHMGS was joined by the NW Scale Modelers and Lake Sawyer Hawks Radio Controlled Airplane Club for the Hobby Day Expo at the Museum of Flight.We had a good turnout of gamers for the event and a good number of people stopping by to watch the games and ask questions.
It was fun to see some of the other hobbies there and I'm sure it gave the museum-goers an interesting view of the different hobbies.

As usual, NHMGS had four gaming tables and some information tables. Thanks to Al for covering the information table for most of the day. He did a great job talking with people about the hobby.
The morning session had an air attack on a bridge during the Vietnam War (using the AirWar C21 rules), a World War I - Wings of Glory game, a World War II Eastern Front microarmor game, and the air battle over Malta game Kevin and I ran.
The Malta game went well, but the RAF took a real beating. They lost 3 out of 6 Hurricanes (the other 3 were all damaged) and only knocked down 1 bomber (although 2 others were crippled). However, the Italians didn't have much luck in hitting their targets, so it was a complete defeat.

In the afternoon there was a Star War Armada game, the Battle of Coronel naval game, a continuation of the microarmor game, and a What a Tanker game. I took the chance to play the tank game, driving a Panzer IV.
I also took some time to look around the museum. In addition to their normal exhibits, they had some items from the recent First Man movie about Niel Armstrong. This included a model of the Lunar Excursion Module (LEM) that really looked great.
Overall, it was another good day at the museum. Be sure to take a look at the photos on Kevin's A Gamer's Tales blog and Dean's WAB Corner blog.

Monday was a day off for me (one of the rare times I actually get Veterans Day off), so Kevin and I decided to do a playtest of the Malta raid game we are running at the upcoming NHMGS Museum of Flight Game Day. We put the word out about the game and expected a handful of players. We were both a little surprised when eight people showed up for the game.
The scenario is a straight-forward bombing run on Valetta harbor by nine Italian BR.20s, escorted by four Me-110s and intercepted by six Hurricane IICs. The bombers could choose from three different targets, although after a couple turns, it was pretty easy for the RAF players to guess where the bombers were going.

We were using David Manley's unpublished Air War 1940 rules for the game. Our previous games used relatively lightly armed fighters, so I was really interested in seeing how the cannon-armed fighters would do.
The game went pretty well and played out fairly historical. The RAF knocked down one bomber and damaged several others (two had fuel leaks and probably would not make it home). The Me-110s shot down one Hurricane and, along with bomber defensive fire, damaged some others. The bombers did minor damage to the floating drydock (call out the painters) and moderate damage to the warehouses. We rated it a minor Axis victory. Overall everyone seemed to enjoy themselves.

Kevin did a great job painting up the aircraft. The Valleta map looks really good and should be a hit at the museum game day. We are hoping for a good turnout at the museum.
Posted by Dave S. at 9:48 PM No comments:

Catching up on Odds and Ends

October turned out to be bad hobby month for me. For one reason or another, all of my October gaming plans fell through and most of my hobby projects languished on the paint bench.

I'm hoping to turn that around in November. But, in the meantime, I want to catch up on a few things. 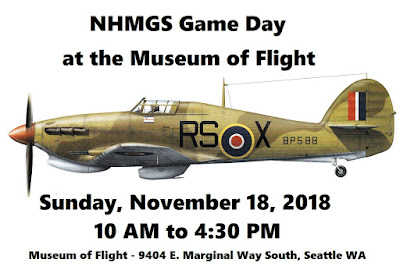 This year NHMGS Game Day at the Museum of Flight is slated for Sunday, November 18. If you're in the area, be sure to stop by. The museum is advertising the 18th as a Hobby Day Expo. So we will share the floor with the NW Scale Modelers and Lake Sawyer Hawks Radio Controlled Airplane Club. Once again NHMGS will have four game tables and the schedule of games is set.

AM Games
- Air War over Malta (Kevin and I are running this one)
- Thuds Over Hanoi
- Wings of War
- Micro Armor - Eastern Front 1944: Soviet Attack

It should be a good day of gaming. I'll be sure to post some pictures after the event.

Voting is all done for DANG 2018 and the winning game this year is entitled Cradle of the Rebellion - The Siege of Charleston. The general idea for this American Civil War mini-campaign is to start just after the First Battle of Charleston Harbor when the Union Army and Navy began cooperating in the siege of Charleston, South Carolina. The Union will be tasked with using their ironclads to reduce the Confederate forts and batteries around the harbor, allowing the Army to storm them, while maintaining a tight blockade on the city. The Confederates need to support their forts, while supporting the blockade runners or even trying to break the blockade! As usual with DANG, both sides will have some options to start the game and missions they must complete. 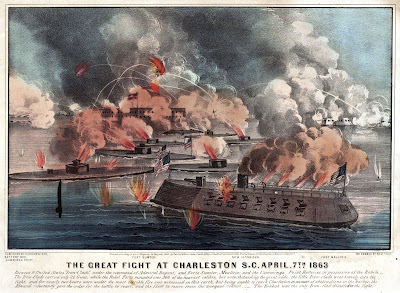 I'm hoping to get two or three battles out of the game, including at least one ironclad fight.

I'll be borrowing a lot of the ships for the game from others. But I am planning on getting a few to put together myself, so there won't be too much in the way of planning photos.


Cruel to be Kind 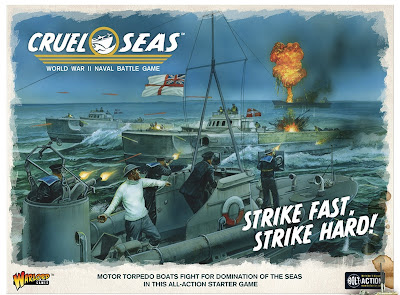 Warlord Games recently opened pre-orders for their new naval game Cruel Seas. The game covers coastal forces actions during World War 2 using 1/300 scale miniatures. Those of you that read my blog know that I like doing coastal forces games and have a wide variety of coastal craft, but they are all 1/600-700 scale. I like the look of the miniatures and I'm interested in the learning more about the rules, but I'm not sure about a new scale. Last year, I was very interested in the Blood Red Skies game when it was first announced. But when I read the basic rules and as more information became available, I found that I was disappointed with the system and saved my money.


That said, the videos and information that has been posted for Cruel Seas seems encouraging. So it will be hard for me to resist this game and I'll probably order a starer set. But, assuming I like the rules, I will probably use 1/600 scale ships (unless, of course, I just can't help myself and have to buy the larger ships).