My real job has been keeping me busy lately, but I wanted to post an update on my building efforts for my planned Enfilade games.

I'm cutting and shaping the hull for the Iranian Hengam class LST for the Operation Morvarid scenario. I'm using 1/4" thick basswood as the basis for the hull. I'm going to apply some thin sheets of hobby styrene to the hull to smooth it out (so that I don't have to worry about the wood grain). The final version won't quite be 1/700 scale and I'm sure I will miss some of the details, since there aren't a lot of great pictures/drawings of the ship, but will be pretty representative of the class. There isn't much to see right now, so there aren't any pictures.

I've just about completed the conversion of the Project 206 hydrofoil from a torpedo boat to a missile boat. While I talked through the conversion in my last post, I decided to cobble together a couple side view drawings so you could really see differences between the 206M and 206MR 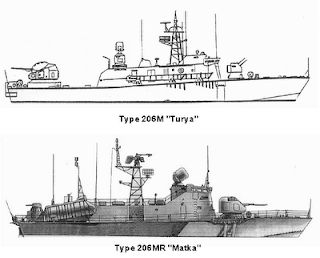 And here is how my version looks.﻿


﻿All things considered, it is turning out pretty well. I might add a few more details and shape some parts a little more, but basically the conversion is complete. The major changes from the base PT Dockyard Turya kit were:


It was a fun little project and it should look better once I get some paint on it. Here a picture of the Project 206MR with a Skytrex Osa II for some size perspective (each square on the mat is 2 inches).﻿ ﻿

Registration for Enfilade, the NHMGS gaming convention has opened up and it looks like it is time to figure out what games I want to run at the convention. There are six gaming periods at Enfilade (two on Friday, three on Saturday, and one on Sunday) and because I want to get some gaming in, I only thinking about two games this year. Although I have offered to help out with Keivn's Sluys Project, which I think will happen on Friday night.

Right now I'm thinking about a couple games, one game will be a missile boat action loosely based on Operation Morvarid from the Iran-Iraq War (more boat action and fewer aircraft) and the other game will be a WWII Pacific PT Boat action. I think I have, or can borrow, most of the ships needed for both of these games, which will allow me to direct my limited gaming funds for this year into the on-going Age of Sail project. Even though I keep hearing PT Dockyard's LCS-2 model calling for me to buy it (maybe later this year).

To start off with, I'll talk about the ships I'll need for the Operation Morvarid scenario. For the Iranians I'm thinking of the following: 2 Kaman class missile boats (I'm going to borrow these), 1 Cape class patrol boat (I'm using a stand-in for this one), and a Hengam class LST (I'm going to try scratch-building this one). I will also have some helicopters for the Iranians.
﻿
﻿On the Iraqi side I'm looking at the following: 2 P-6 torpedo boats (from PT Dockyard and already built), 2 Osa I missile boats (from Skytrex already built) and 2 Osa II missile boats (from Skytrex, which are not built).

I've put together other kits from the Skytrex Seastrike line (I used these ships in the 2007 DANG Arab-Israeli War game). The Skytrex Osa boats, both the type I and II, are both pretty basic. There isn't a lot of detail on hulls or other parts. That isn't necessarily a bad thing, since there isn't any flash, as you can see in the picture below, and the parts all fit together easily.
﻿I'll post more pictures as I assemble and paint the boats.

As I prepare to scratch-build the Hengam LST, I've pulled out another modification project to hone my skills a little. I'm starting out with a PT Dockyard Soviet Turya Project 206M torpedo hydrofoil and converting it to a Matka Project 206MR missile hydrofoil. I've been thinking about doing this for a while, basically since the Russian-Georgian Conflict when there were rumors about a naval engagement between missile boats in the Black Sea. So, I'm really trying to turn the Turya kit into the Georgian missile boat Tbilsi. ﻿
﻿The PT Dockyard Turya is pretty nice, but there are a lot of armament difference between the Turya and Matka. ﻿
﻿The Turya comes with 4 torpedo tubes a forward 23mm gun and an aft 57mm gun. The Matka has 2 SSN-2 missile tubes, a forward 76mm gun and an after 30mm gun. So about the only thing that will be used from the kit is the hull, mast, and Bass Tilt radar director. The missile tubes and 30mm gun will come from some leftover parts from a Dragon Soviet Missile boats kit, but I have to scratch-build the 76mm gun.

I'll start the conversion process by cutting the torpedo tubes off the hull, filling and flattening out the area above the bridge, and lengthening the superstructure. Then I'll scratch-build the 76mm gun and mount all the weapons on the hull. Hopefully this will be as easy as it sounds.