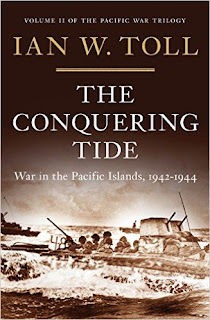 The Conquering Tide is the second book in Ian Toll’s Pacific War Trilogy. In this book covers the World War II in the Pacific from mid-1942 through mid-1944.

The first half of the book covers the Guadalcanal campaign and the American offensive up the Solomon Islands. While a lot of this is information you have probably seen or read before, Toll does introduce some new material that covers things from the Japanese point of view.

After the Solomon Islands, Toll takes a break from the island hopping campaign to cover the submarine war. This is primarily done by focusing on the patrols of USS Wahoo (SS-238) to illustrate what was happening in that part of the war. But there are a few other submarine stories there too.

The book then moves to the American attacks into the Gilbert and Marshall Islands in 1943 and 1944. These chapters show the evolution of American technology, tactics, and firepower from the battles around the Solomon Islands. Toll makes it pretty clear that the Americans were coming up with new ways of fighting, while the Japanese were stuck in pre-war ideas and spending too much time in inter-service rivalries. The book does point out similar inter-service problems on the American side, but it also shows how the Americans were able to work through those problems. The book continues with the campaign through the central Pacific with air attacks on Truk and the invasions in the Marianas Islands. The dominance of American carrier airpower is plainly shown in the Battle of the Philippine Sea (AKA the Marinas Turkey Shoot).

Throughout the book Toll interweaves stories from Australia, the United States, and Japan to show what was happening on and how the war was seen from the home front. This provides a nice balance with all the battles and gives a good idea of struggles the Japanese people faced during this time.

While most of the book covers what the admirals and generals were saying and doing, it still has lots of good operational and tactical stories too. As with the first book in the series, there are lots of first-hand accounts of the different actions.

Toll has become one of my favorite authors for naval history. His Six Frigates book was great and I enjoyed Pacific Crucible, the first book of the Pacific War Trilogy. The Conquering Tide bites off a big chunk of World War II in the Pacific and I found the first half (on Guadalcanal) to be a little slow. However, the rest of the book is good and brings out some new material. Overall, I would recommend reading The Conquering Tide and I think it is a good addition to books on the Pacific War. The one flaw I see in the book is that it really focuses on the drive through the central Pacific and says very little about the fight in the New Guinea area.

From a gamers point of view, this book provides lots of gaming fodder for naval, air, and land games. After reading the book I could see a number of interesting situations that don’t usually show up as wargames. The raid on Truk alone provides new air and naval actions, and there are a number of land gaming ideas around the different island invasions.