Drumbeat was held on Saturday and turnout was good enough that the event basically broke even. The space was a good size, with lots of tables, and there was plenty of food within walking distance.

There was a morning and afternoon game period with about six games per period, along with DBA all day. Kevin and I ran the Taiwan Strait game in the morning and in the afternoon I played in Kevin's 'Arrest Lewis and Clark' game. I did grab a few pictures of some of the other games at Drumbeat, which are posted after my battle reports.

The Taiwan Strait game was basically a repeat of the playtest game Kevin and I ran a few weeks ago. The PLAAF had the choice of taking six J-8II fighters or a pair of Su-27s as the escort for their six Q-5 Fantan bombers. The PLAAF mission was to sink the Taiwanese frigate. The PLAAF players opted for the J-8IIs, although I almost had them talked into taking the Su-27s. On the Taiwanese side, a pair of Mirage 2000s started on the map near the frigate and a pair of indigenous Ching Kuo fighters would arrive on turn 3.
﻿
﻿﻿﻿
﻿There were several early missile shots by the Mirages that missed or only did minor damage. Things started to change when the Ching Kuo fighters arrived.
﻿They quickly knocked down two Q-5s and became the center of the PLAAF's attention. The J-8II's fired off a majority of their radar missiles at the two fighters, knocking down one of the
Ching Kuos. A close gun attack hit the other, starting a fire on the fighter.
﻿﻿But the Ching Kuo had gotten off another missile shot that took out another Q-5. The remaining bombers continued to close with the frigate. They were able to get within one move of the frigate before missiles from the frigate and returning Mirages knocked them down. In a final attempt to do something to the frigate, a J-8II fighter dove down to strafe the frigate, hitting and doing light damage to the ship. But the pilot's happiness was short lived as the 76mm and 40mm guns on the ship blew his plane out of the sky.

In the end it was another Taiwanese victory, but the PLAAF did get close and the strafing actually did a little damage to frigate (which is a first for this scenario).

The 'Arrest Lewis & Clark' game was a hypothetical game based on attempts by the Spanish to intercept the Lewis & Clark expedition. In this case, a group of Spanish regulars, militia, and Indian allies caught up with the American encampment along the Missouri River. I was playing the Spanish Regulars and wasn't really very confident in the ability of my troops to get the Americans.
﻿The Spanish militia, which included a group of mounted lancers, and Indians were able to catch a couple groups of American out foraging and inflict a bunch of casualties on them. I took the regulars toward the encampment and boats. I did shoot up a couple groups of Americans with only a few losses (one of which was the overall commander). But bad American die rolls and good Spanish ones decided the game in favor of the Spanish. Kevin used the Brother Against Brother rules for this game. They played fast and easy, without too many questions.

Here are a few photos from some of the other games from Saturday.

There was a game of Ambush Alley on the table next to ours. It looked like the players had a pretty good time and the system seems to play pretty well. 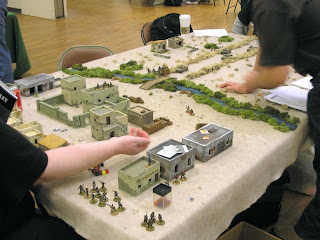 There was a Napoleonics game using the Black Powder rules. It was Austrians vs. French and I think that the French ended up winning both times it was played. 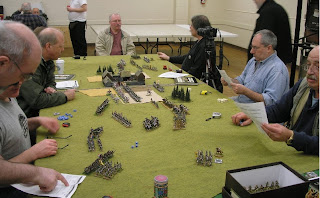 In addition to the DBA ancients games, there was a game of Tactica II, but I didn't hear how that one turned out. 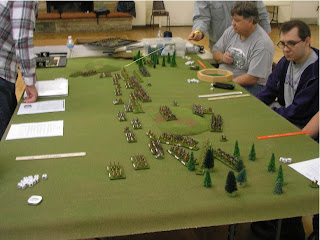 There was also a Mexican-American War game that used the Fire & Fury Regimental rules. this looked like a fun game and the Eureka figures looked great. 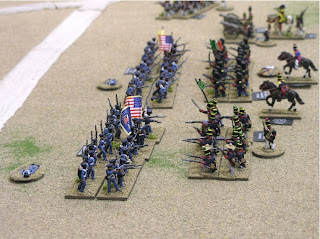 There were several other games that I didn't get pictures of or the pictures just didn't turn out (sorry about that).

Overall, it was a good day of gaming and it seemed like everyone had a good time.

Back to the Shipyard

Now that the Lepanto game is done, I'm getting back to work on my 15mm Age of Sail ships.

I've gotten some more work done on Thoroughbred cutter and gunboat, first reviewed in this post and shown assembled in this post. I searched around for historical paint schemes for these types of ships, but I couldn't find much on how small ships were painted. It mostly seemed like it was up to the captain and depended on whatever was available at the time.

With that in mind, I decided to give the cutter a black hull with a pale yellow stripe around the gunports and a red interior (although it turned out a bit blotchy in places). I think the colors give it a bit of a Royal Navy look. The deck was given a light sandstone color and still needs to have a wash put over it to bring out the lines in the deck.
﻿As you can see from the photos, I haven't mounted all the cannon or the yards and sails, but you can see the gaff and boom. I plan on keeping the mast and sails removable to help show battle damage. I don't know if that will really work, but I'm going to give it a try.
For the gunboat I went with the basic black hull with a brown upper edge. The trim around the edges of the deck grating got a nice red color. The gunboat deck needs to be washed too and the mast was borrowed from the cutter (the rigging for the gunboat is similar to the cutter).
﻿Finally, I wanted to show a size comparison between the two vessels. The cutter is just a little longer and wider than the gunboat. The cutter will be armed with ten 18 lb carronades and a pair of 12 lb long guns, while the gunboat has a pair of 24 lb long guns. ﻿ ﻿I expect the cutter would probably win any battle between these two. But, it could be an interesting fight to see what damage the gunboat could do before the cutter got close enough to use its carronades.

I'm looking forward to getting more done on the sailing ships, but I know there will be other stuff to distract me. Next weekend I'm helping to run an AirWar C21 game at Drumbeat and I'll post photos of the game when I get a chance.
Posted by Dave S. at 5:20 PM 2 comments:

I have always liked air gaming and enjoy playing various air games. However, for the past several years most of my time has been spent on naval projects. Mainly because there haven't been a lot of other people doing naval games, so I felt I needed to wave the naval flag for a while. Now I'm looking at getting back to a little air gaming, while still playing

Over the past couple months Kevin and I have been talking about trying to get back into some air games. One of the things that was holding us up was deciding what set of rules to use for some jet games. We both have lots of different sets of rules for jets, including my own adaptation of the Mustangs game called Phantoms, but most of them are hex based and we have been thinking about moving away from having to play on hex-mats (mainly because we don't have the hex-mats). When looking through the various rules out there, we decided to give the AirWar C21 rules a try.

Kevin's late November blog post about his jets, got us moving forward again. We have talked about putting on a game for Drumbeat, the upcoming local one-day miniatures gaming event, and since Drumbeat was pushed from the beginning of January to the end of the month, we decided to get to work on a game.

Because we wanted to use the planes we have on hand, we are planning on recycling an older scenario; The Taiwan Straits. This scenario covers an attack on a Taiwanese frigate, supported by some land-based fighters, by a bunch of Chinese Navy (PLAN) jets. The Taiwanese players start with a pair of fighters (either Mirage 2000s or the indigenous Ching Kuo) and the frigate on the board and will be reinforced by additional fighters during the game. The PLAN players choose their fighter escorts: either six J-7s (MiG-21s), or six J-8IIs, or two Su-27s, then they pick the attacking aircraft: either six J-7s armed with rocket pods or six Q-5 armed with four dumb bombs or two laser-guided bombs.﻿
﻿Kevin and I got together yesterday to run through the scenario with the AirWar C21 rules (the first time either of us had played the rules). I was sort of hoping we would have a couple other people show up, but most people were probably watching the Seahawks - New Orleans Saints football playoff game. The planned scenario is really too big for just two players, so we reduced total number of aircraft to a more manageable number, with Kevin running six planes (three J-8 fighters and three Q-5 bombers) and me running the frigate, two Mirage 2000s, and two reinforcing Ching Kuo fighters. ﻿
﻿Even with this being our first time with the rules, the game moved along at a good speed, with only a few minor questions along the way. Early in the game we both tried out a lot of different maneuvers, fired missiles, and tried to figure out the best way to fly the planes. Neither of us had much success with our initial missile attacks, the PLAN plans swept by the Mirage 2000s, and it looked like the Q-5s were going to easily make it to attack the frigate.
But then the attacking planes moved into range of the frigate's missiles. The frigate started firing off missiles and quickly knocked down two of the incoming Q-5s. The remaining attacker was able to avoid the SAMs when the ship failed its lock-on attempt, but the frigate's 76mm gun was able to knock it down before it could drop its bombs.
﻿﻿The Taiwanese fighters were only able to knock down one PLAN fighter; while the PLAN was unable to shoot down any Taiwanese fighters, but did damage one with a gun attack and almost got lucky with a 'Golden BB' roll on the damage table. ﻿
﻿Overall we thought it went pretty well and that we are in a good position for the game for Drumbeat, which is on January 29. I'll let you know how it turns out.