Last year David Manley kicked off the first International Naval Wargaming Day. A day to "Celebrate the birth of the father of naval wargaming, Fred T. Jane, by running or taking part in a game of your own!" 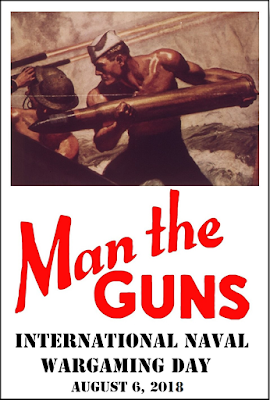 This year, Jane's birthday was on a Monday, which made it really tough to organize a game with other players. But the celebration must go on, so I grabbed some ships for a little solo action.

This year I pulled out some of my Spanish - American War ships for a little pre-dreadnought action using David Manley's Broadside and Salvo rules, which are included in his Splendid Little War mini-campaign. The scenario was an encounter in the Caribbean between heavy ships of the US Atlantic Squadron and Admiral Cevera's cruiser squadron.
The Spanish objective was to escape across the map, while the Americans were trying to stop them.The Spanish cruisers had a little speed edge, but were out-gunned by the Americans, which is a pretty classic naval situation.

The turn sequence for the Broadside and Salvo rules is:
Overall a clean and easy turn sequence. Initiative proved to be an important part of the game.

Gunnery is resolved by be competitive D6 die rolls, which are modified by the attacking ship's attack factor and defending ship's defense factor, along with some other modifiers for damage, range, etc. If the defender's modified roll beats the attacker, there is no damage. If they are equal, the defender takes a temporary hit. If the attacker beats the defender, the defending ship is damaged with multiples of the defender's roll doing more damage. There is also a chance of critical hits. One level of damage still allows the ship to move and fight, but with negative modifiers. A ship is Silenced with two levels of damage and can move, but not shoot. A ship is Crippled with three levels of damage and cannot move or shoot. Four levels levels of damage means the ship is sinking. Action Points can be allocated to repair Silenced (3 APs) and Crippled (4 APs) ships one level. I used markers to show each level of damage.

Over the next couple of turns the Spanish die rolling was very bad, while the Americans continued to inflict more damage on the Spanish line.
The Spanish were able to repair one ship, but things just kept going downhill. In the end all the Spanish ships were sunk and the only damaged American ship was the cruiser New York.
The game played really quick. So quick, that I decided to try another game, but with a different scenario.

Overall the games were quick, keeping with the fast-play rules, and deadly. The 1-on-1 squadron battles probably weren't as interesting as a multiple squadron action. After playing, I thought I should have created multiple squadrons in the first scenario to see how that would have played out. Another alternative would have been to add some more ships (regular cruisers for the Americans and torpedo boats for the Spanish) to make more squadrons.

The same rules are used with the Russo-Japanese War campaign and I think they would work well there, since both sides have more ships.

I recently finished up six Raiden Italian CR-42 Falcos. The planes are a fairly new addition to the Raiden line and there weren't any photos of them on the I-94 website. I've had trouble assembling other World War II biplanes and since there weren't any photos on the website, I was a little wary of getting the planes. But they turned out to be pretty easy to assemble. The planes come in 3 parts, the fuselage, the lower wing (with the fixed landing gear and one set of struts) and the upper wing (with more struts). Overall, the assembly work wasn't too bad. So, if you need some 1/285 scale Falcos, I would recommend these.

The Falcos will be part of the upcoming Malta air campaign and will make some appearances in Western Desert games. The camouflage scheme is a base sand color, with green and brown irregular shapes. I also painted the engine cowling yellow, mainly because I like how it looks.
Kevin recently finished his six CR-42s too and while the paint schemes are similar, they are different enough that it will be easy to tell them apart (plus mine have yellow noses).
Overall, I was pretty happy with how the planes turned out. I'm finishing up some Gladiators for the game, and I also have some Fiat G-50s and RAF Tomahawks in the works. The last two types are for Western Desert games and won't make an appearance over Malta.

I'm also preparing for International Naval Wargaming Day. But, since it falls on a Monday and I kind of messed up scheduling with others, I'll be doing a solo game again this year. Right now I'm looking at a Spanish - American War scenario where Admiral Cevera's cruiser squadron meets up with the American Flying Squadron (or maybe the North Atlantic Squadron) in the Caribbean. I'm going to use David Manley's Broadside and Salvo pre-dreadnought rules (which are included in his Splendid Little War and White Bear, Red Sun games).