After I got the naval gaming mats from TABLEWAR, I kept looking at their other mats to see which others I would want to add to my collection. I really like the mouse pad material mats and TABLEWAR has a 10% discount for returning customers, in addition to discounts for other occasional sales, making it a little easier to keep going back. Last year I picked up a couple Grassy Plain mats that we used in the Philippines game and over the past few months I've rounded out my collection with a couple Desert Planet mats and a Space mat.

I tried to take some overview photos of the desert mats, but they didn't turn out very well due to lighting, so check the link above for a larger view. But I did get a few close up photos with some World War II North Africa tanks.

The mat color is a more rocky desert color than sandy desert (a little more orange than sand), but they should look fine for any game. I've been thinking about doing some What a Tanker North Africa games and these mats will be perfect for that.

I like the look of the space mat too. I only got one of these, since I don't really expect to be doing large space battles. The overview photo for this mat turned out okay, but the nebula colors are more vivid in person. My Galactic Knights ships look good against the background.

The GEO mat is plastic, so it does cause a little glare. But nothing too bad. Here is how it looks with the desert mat.

And with the ocean mat.

The GEM mat provides a little more flexibility for gaming, allowing me to play rules that have hexes without too much extra effort.

One drawback is that the GEO mat didn't flatten out as much as the other mats, which causes a few 'waves' on the surface. So I may need to get some clamps to hold it flat. I also rolled it up with the space mat to see if that would help flatten it.

Overall, I'm pretty happy with my mat collection. I can do sea, land (desert and green), air (using any of the ocean or land mats), and space games. 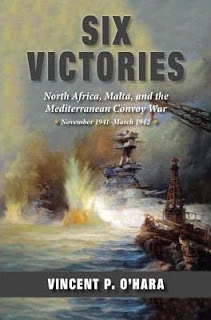 Six Victories: North Africa, Malta, and the Mediterranean Convoy War November 1941 - March 1942 provides an in-depth account of the naval action in the Mediterranean during fall 1941 and winter 1942. The book covers a critical period in the war from the arrival of Force K at Malta through the Second Battle of Sirte. The book's title is based on six key victories, three British and three Axis, that happened during this time. The author, Vincent O'Hara, draws from British, German, and Italian archives to cover the information from both sides.

The book starts out with an overview of sea power in the Mediterranean in 1940-41and then moves to a chapter on communications, intelligence, and logistics. This second chapter sets the stage for the rest of the book and some new information (at least to me) on communications and intelligence capabilities for both sides. Most English histories of the war talk about Ultra and the British code-breaking skills, making it appear that the British had the upper hand. But O'Hara reveals that the Germans and Italians both had successes in breaking the Royal Navy's tactical codes and merchant ship codes. In the overall intelligence fight, O'Hara gives the Axis powers the edge, with statistics to back up his conclusion. The logistics portion of the chapter also has some interesting facts. The Mediterranean naval was was basically a war of logistics, with both sides trying to get supplies through the enemy to keep their forces in North Africa or Malta in supply. One thing that is rarely discussed is the port capacities for the destinations, which greatly affected the size and timing of convoys. In 1940, the two primary Axis ports, Tripoli and Benghazi, could only support off-loading five cargo ships or three cargo ships respectively. By December 1941, Tripoli had increase capacity to six or seven large ships, but Benghazi remained limited to three ships. These numbers were lowered even more by bad weather and enemy air attacks. This helps explain why Italian convoys were generally small and run more often than convoys to Malta. The final part of the chapter talks about the Italian Navy's fuel situation, which ended up limiting training, escort sizes, and operations against Malta convoys.

With the stage set, the remaining chapters cover the action, starting with the arrival of Force K at Malta. The time period from the end of October through the middle of December 1941 was the high point of Royal Navy operations. During that time less than a third of the supplies shipped from Italian ports arrived in Libya. Shortages of ammunition and fuel forced the Afrika Korps to retreat four hundred miles. Then, in the space of thirty hours, this all changed. First, Italian naval forces broke the blockade by fighting through a major convoy that arrived in time to blunt the British advance; next, Force K plowed into a minefield that basically removed them from action; and finally, a daring attack by Decima (X) MAS, specialized Italian commandos, crippled the Royal Navy's battleships in Alexandria. The swing in fortune was immediate and dramatic. After this Axis forces would implement a blockade of Malta and maintain maritime superiority until the arrival of Anglo-American forces for Operation Torch in November 1942.

Overall I found Six Victories to be a good read, especially for anyone interested in naval operations in the Mediterranean. Some of the battle descriptions are not as detailed as other books I've read, but the information on convoys and other operations more than make up for this. Vincent O'Hara has written a lot of interesting naval books and Six Victories is a good addition to that group.

From a wargamer's point of view, this book can provide some great ideas for setting up battles or a mini-campaign. It provides a good commander's eye view of the battles that can be used to implement some good "fog of war" rules for battle scenarios.