Book Review - War at the End of the World 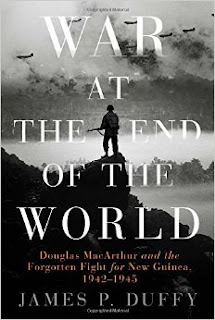 War at the End of the World covers the often overlooked World War II campaign in New Guinea. There aren’t a lot of books (at least in the U.S.) on the New Guinea campaign, which always seemed a bit strange to me since it was a hard fought campaign that involved Americans and it could arguably be said that it was as important as the actions in the Solomon Islands.

The book starts out with the Japanese invasion of New Britain in 1942, then moves to Japanese and Allied operations on New Guinea in 1943, and ends with the last major operations on the western end of New Guinea in August 1944. The author, James Duffy, covers a lot of strategic and tactical aspects of the campaign and includes Japanese and Australian perspectives. The book has a good chapter on the fighting along the Kokoda Trail, but it still tends to concentrate on American involvement and especially on General Douglas MacArthur’s role. The subtitle “Douglas MacArthur and the Forgotten Fight for New Guinea” gives you an idea of how important Duffy thinks MacArthur’s leadership is in the campaign’s overall success. The book does do a good job of talking about the Allied strategy for outflanking and isolating groups of Japanese troops across the island to cut off their supplies; forcing them to either surrender, starve, or die of disease.

Overall, the book provides a really good overview of the campaign and battles. But it does not go too deep into any of the battles or get too detailed about the units involved in the battles. It does have a pretty extensive bibliography that can point the way for those that want more details. It is a good book and I would recommend War at the End of the World to anyone with an interest in the Pacific Theater during World War II.

From a gamer’s point of view, the book gives lots of ideas for land battles (I originally got it to get some ideas for my 28mm Australians shown here). It doesn’t have as much for the naval and air gamers, but you can still pick up some ideas.