I've finally finished up the Iranian LST, which, with a couple borrowed Kaman class missile boats, completes the needed forces for the Operation Morvarid scenario.

As I've mentioned before, the LST is based on the Iranian Hengam class, which looks like this...﻿
And here is my completed version from a similar angle...
﻿﻿It isn't a perfect match. As you can see, the bow on my version is a little pointier and overall my ship is blockier than the real thing, but it should work fine for gaming purposes. Here is an overhead view so you can see the helicopter deck. I'm not going to zoom in on the deck too much, since I hand-painted the lines on the deck and they aren't perfectly straight. ﻿﻿


Here is a group shot of the Iranian ships for Operation Morvarid.﻿


﻿In the front are two Kaman class missile boats (borrowed from Kevin) made by PT Dockyard. In the back is my semi-Hengam class LST and a stand-in for the Cape class patrol boat (in this case it is an American 110' Subchaser from PT Dockyard), with a UH-1 helicopter gunship overhead.

Here is a group shot of the Iraqis for the scenario.
The Iraqis have, from left to right, two Osa II missile boats, two Osa I missile boats (all from Skytrex) and two P-6 torpedo boats (from PT Dockyard).

With the set up and some other restrictions for both sides, it should be an interesting scenario.

As I work on the ships for my Enfilade games, I decided to add a little (potential) air cover for each game.

For the Operation Morvarid game, I thought I would give the Iranians the chance to add some UH-1 gunships to their group. There isn't any mention of UH-1s in the real operation, but it seems plausible they could have been used and I thought they would add an interesting aspect to the game. Historically there were some Iranian F-4s taking on Iraqi MiG-23s and shooting up the Iraqi missile boats, but I don't want to turn this into an air-to-air game, so I'm going with helicopters. I will probably give the Iraqis some portable SAMs to offset the helicopters.
The helicopters are the 1/600 scale Bell Iroquois from Tumbling Dice. They are a good, although a little chunky, representation of the Bell 212 series. You can see the not-quite completed Iranian LST in the background. I still need to touch up the paint job and mount it on a base before it is finished, but it looks pretty good when slightly out of focus.

For the Pacific coastal action, I'm planning on adding a F1M2 'Pete' as an option for the Japanese. This type of floatplane operated all over the Solomons area in both day and night, so it is certainly feasible that one could be acting as cover for a barge convoy. I'm not too sure how useful it will really be in the game, but it should be interesting finding out.
﻿The Pete is a plastic kit from one of my 1/700 scale IJN accessories boxes. Tumbling Dice makes some of these too, but I already had the plastic one on-hand and it didn't seem worth making another order for those right now. The plastic Pete seems a little fragile (mainly because it is so lightweight), but it should hold up fine since the players can move it by the base. Plus, since it was just something I had laying around in a box, it won't be a great loss if it gets broken.
Posted by Dave S. at 5:16 PM No comments:

Time for a little gaming

Rather than spending time working on my stuff, I spent part of yesterday helping my friend Kevin playtest his Battle of Sluys scenario for Enfilade. we were joined in the playtest, by Mark and Joe Waddington. You can read more about Kevin's work on this project on his blog and just click the "cogs" label to see the whole story.

﻿Kevin is using David Manley's Quick Play Medieval Fleet rules for the game and yesterday was the first chance to test out the ships, terrain, and rules. The rules are somewhat like DBA, in that a turn consists of one side rolling for command points, allocating them by formation, moving, and then conducting combat (artillery, missile, and close combat) followed by the other side doing the same. Overall, pretty easy to understand, but with enough decisions to keep players in the game.

We set up the forces, with Mark and Kevin as the English and Joe and I playing the French. The French set-up in the middle of the channel between the mainland and an island. We also started the game chained together and can't unchain until 3 turns after the first French ship takes damage, so there really wasn't a lot to do for the first few turns but wait. Joe ran the French front line, while I took the third squadron in the back, which was a mix of mercenary galleys and medium cogs. ﻿
﻿Before the start of the game, Kevin sprang a little surprise on us. He told us that overnight the French fleet had drifted toward the island on our right. So, all the sudden there was a big gap on our left flank. The English moved up with two groups to engage the French front squadron with artillery and later missile fire, while the third group tried to move through the gap on the French left. Unfortunately for them one of their cogs kept running aground in the shallows, forcing the group to stop before pushing ahead.﻿ ﻿This delay allowed time for my third squadron to unchain and move to block the gap. I was able to defeat the first group of English cogs in close combat.﻿ ﻿Then I pushed on into the flanking squadron taking out the squadron commander. ﻿ ﻿This was the schedule time for the Flemish fleet of small cogs to appear in the French rear. However, by this time things weren't looking good for the English and the Flemish had to sail into the wind to reach the French line. We stopped the game, ate some pizza, and talked about potential changes for the scenario. Kevin took a few notes and after he sorts things out, I expect we will give it another play through.
In addition to seeing Kevin's cogs, I got a chance to look at ships Mark is scratchbuilding. It was around a year ago that Mark was thinking about scratchbuilding some ships for the Great Lakes during the War of 1812. I think he was originally planning to do the ships for the Battle of Lake Champlain, but I talked him into working on ships for Lake Ontario. He has been cursing my name ever since, but the ships look really nice. They are 1/600 scale from wood, with metal masts, and I'm looking forward to getting a chance to play with them.

A Break for Opening Day

From time to time I take a break from gaming topics and this post is one of those breaks. As always feel free to skip over this post if you just aren't interested. 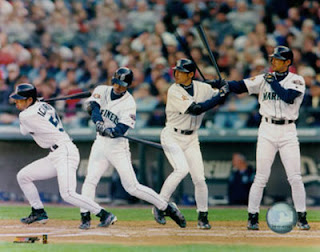 Today is opening day for my hometown team, the Seattle Mariners (Major League Baseball Opening Day was yesterday, but the M's first game is today). For me Opening Day is the breakpoint between Winter and Summer, good weather is on the way (although it is raining here today), and there is optimism in air (even when you know your team does really have a chance).


I expect that it will be a rough year for the hometown nine (I think they will be lucky to win 70-75 games this year). But it is hard not to feel positive on Opening Day. One of the local baseball writers posted the following a list of great things about Opening Day and I thought I'd share it here.

3: The pre-game introductions of the entire team, even the equipment managers

4: The excitement in the eyes of the rookies doing it all for the first time, as they stand on the base line

5: The stats count - for your fantasy team, too

7: You know there's 161 more games ahead, the six-month soap opera and reality show about to commence

8: At least 161 more. Eternal hope, and the sense that anything is possible. Pirates fans can dream of contention and Cubs fans can believe this will finally be the year. Mariners fans, too.

9: Even people who don't care about baseball are paying attention today.

Now back to your regularly scheduled naval gaming posts.
Posted by Dave S. at 9:48 AM 1 comment: