In my search for a good set of rules of rules for my 15mm Age of Sail ships, I go in on the Sailpower 2.0 Kickstarter (you can read my impressions of the Kickstarter items in a previous blog post). I'm finally getting around to posting my thoughts on the rules (note that this review is based only on a couple solitaire games). 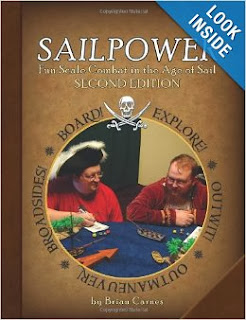 The Sailpower 2.0 rules comes as a 138 page printed book. However, don't be put off by the size of the book, it has lot of examples along with tables and optional rules. The basic rules aren't really that heavy and don't take up a lot of the rulebook. The rules are designed for use with 15mm (approx. 1/100) scale ships, but there is a page covering scale conversions if you want to use a larger or smaller scale. Ranges in the game are measured in inches and the game uses a D20 for all rolls (you will need a lot of them if your ship has a lot of guns). The rules are meant to cover sailing actions from the Golden Age of Piracy all the way through the Napoleonic Wars.

Ship Movement: During this phase the players check for a change in the wind direction, then plot their movement on the log sheets, and finally move their ships.

The distance ships move is determined by their initial relation to the wind at the start of the turn, but can change if the ship changes course during movement. If during movement a ship turns so that the movement rate would be lower than the starting movement rate, some movement is lost and vice-versa if the movement rate increases. The rules have a good example of this, so it shouldn't be too confusing, even for new players. Ships can make a turn (up to 45 degrees) at the start of movement, at the end of movement, and after traveling a certain distance, referred to as the Turn Delay, based on the ship stats. Ship must have a minimum number of crew allocated to sailing the ship (or rowing) and if the crew number falls below this value, the ship simply drifts.

One thing I don't think the rules cover very well is tacking (turning through the wind). The rules basically simplify this task and don't really have rules for getting stuck in irons (heading directly into the wind) other than the ship doesn't move. There also isn't any real difference in crew quality when it comes to sailing.

Combat: After movement, players can fire their guns at other ships and shore targets. First you roll a die for each gun that fires to see if it hits (this value is modified but if you roll a 10 or higher on a D20 you hit). Then, for each gun that hits, you roll for damage and mark that off on the target.

The game has 13 different gun types from rail-mounted swivel guns all the way up to fortress guns. There are also rules for mortars. Each gun type is rated for point blank range, an optimal range, and a drop distance. You get a To Hit bonus if you are within point blank range. If you are over optimal range, you get a negative To Hit modifier for each additional drop distance to the target. The drop modifier is an interesting way of handling maximum ranges, since you can always fire your gun, it just has a lower chance to hit the farther the target. There are some other modifiers too, but they are all fairly common (like ship size).

Each gun type also has a number of crew needed to man it. If the gun has half the needed crew, it can only fire every other turn. If you have less than half crew, you can't fire. Guns can be aimed at the rigging, hull, or deck (where the crew hangs out) and there are different kinds of ammunition, including bar and grapeshot.

Overall, I like the gunnery rules. There are enough different gun types and crew is an important component in firing. The only problem I can see is if you are fighting with larger ships, then you will have to roll a lot of dice.

Crew Actions: After combat, crews can fire small arms, grapple/board enemy ships, and repair their own ship. These are all fairly easy to understand actions, but the players must allocate crew to do them.

One thing I expected to see here was some sort of morale check for a ship, but the rules don't really have rules for checking morale or striking.

Record Keeping: During this phase players check on ship damages (fires, explosions, sinking ships, etc.). Then the turn starts all over again.

That covers the basic rules for the game, but in addition to those rules there are Faction Rules that add special characteristics for ships based on the crew. This is a nice addition, since I like rules that show the difference in naval crews.

There are also optional rules that cover ports (including visiting taverns and recruiting crew), forts, and treasure hunting. All of these are nice add-ons and probably will be a good selling point for gamers that want to play some pirate actions.

Overall it seems like the rules play pretty fast and should work well for a good number of ships and players. It seems like they were created for convention pirate games, so I would expect that to be the case. Although I could see things dragging a bit if there are too many large ships in a game. The sailing rules aren't the strong point for the game, but that isn't too surprising if the main focus was on convention pirate games.

Pros: It should play fast, as long as there aren't too many big ships. I like the different gun types and focus on crew allocation for actions. Should be good for convention games.

Cons: I think the sailing rules could be better (it wouldn't take much to improve them) and there should be a crew morale system.