Back in April I posted about the Vietnam U.S. Army figures I got from Crucible Crush. Because I normally like to have forces for both sides of a battle, I ordered the four Viet Cong packs from the same Black Sun range.

There was no assembly needed for any of these figure. Although they needed a little more clean-up than the Americans. The figures are stout fellows with good detail, so even I could pick out the details when painting.

Like the Americans, most of the figures have packs and other gear. They have a mix of AK-47s, SKS carbines, SMGs, rifles, a RPD light machine gun, and a couple RPGs. I painted most up with the black uniform. The officer figure was done up in Khaki and I gave one other figure Khaki pants.

While painting I had a little trouble getting some shadowing on the black uniforms and some of the faces didn't turn out as well as I hoped. They won't win in painting competitions, but on the game table they will look just fine. Here are some closer look photos. 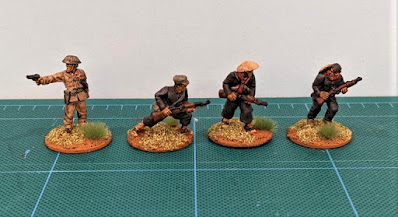 As you can see from the photos, there are several figures that use the same pose but have different hats. That isn't really obvious when looking at the figures on the Crucible Crush website, but was more noticeable when I was painting them up.

Now I just need to pick up some jungle type terrain, which I can also use with my WWII Japanese and Australians.

The Marinefährprahm (MFP) or naval ferry barge, was the largest landing craft operated by Germany's Kriegsmarine during World War II. These vessels were originally developed for the planned invasion of England. But once the invasion was cancelled, they found uses in other areas. MFPs served as transports, minelayers, escorts, and gunboats in the Mediterranean, Baltic and Black Seas as well as the English Channel and Norwegian coastal waters.

There were four basic types, A, B, C, and D, with sub-variants for each of those. The size and cargo capacity increased with each type. Around 700 these vessels were completed by the war's end.
Most of the vessels were armed with 20mm and 37mm anti-aircraft guns, and some had a 75mm or 88mm gun. Those that were converted for escort and gunboat duty were more heavily armed with multiple 88mm or 105mm guns and heavier anti-aircraft guns. The Germans referred to these as Artilleriefährprahm (AFP), while Allied sources sometimes refer to this class of vessel as a "Flak Lighter" or "F-lighter." In addition to escort duties, these heavily armed versions were also used for shore bombardments, especially in the Black Sea and Baltic Sea.

For the next installment in my Black Sea/Baltic Sea project, I put together some German MFPs and an AFP. Like my previous KFK project, these are not very sexy vessels, but they are useful and served everywhere. The MFPs are 3D printed (thanks to David Manley for pointing out the STL files). I decided to go with an unarmed print and then add guns from Warlords Games Cruel Seas Germans. My MFPs are lightly armed with only a twin 20mm on the gun platform. Looking back on it, I probably should have added a couple more weapons here and there. But these are mainly meant to be transports, so they will need an escort.

The AFP started out as an Italian F-Lighter that I found cheap online. Since I already had the German weapons pack, I just substituted German guns for the Italian ones (I’m not positive, but I think the hulls for the German and Italian versions are exactly the same). My AFP is armed with 2 88mm guns, 2 quad-20mm guns, a twin 20mm, and a single 20mm. All of which should provide some nice firepower in the games.

I painted up all the barges in mid-gray, did some pin-washing to bring out a few details, and added some rust stains for weathering. The MFPs each got a little different color on the aft boat to make them easier to ID during games.

Overall, I think these turned out fine and will look good on the tabletop. While they are slow (max speed of 10 knots), their shallow draft should make them tough targets for Soviets MTBs and the AFP has the firepower to help protect the group.
Posted by Dave S. at 11:59 AM 1 comment:

Similar to the British, before World War 2 the Germans created some standardized designs for their fishing fleet could be used by private operators. In return, the ships could be requisitioned by the navy during the war. One of the designs was the small Reichsfischkutter, which would then become the KFK during wartime. KFKs were used as escorts, submarine hunters, minesweepers, and general security duty.

Over 600 of these vessels were completed before and during the war. They were typically armed with one 37mm gun, one 20mm gun, and depth charges. But they often mounted extra guns and I’ve seen photos where the forward 37mm was swapped for a quad 20mm. Because they served everywhere the Germans had ships, these little craft are really useful for European-based coastal forces games.

As part of my Black Sea/Baltic Sea project, I picked up a couple Warlord Games Cruel Seas KFKs to help escorts merchants.

The basic kit is nice and includes two KFKs. The hull and superstructure are resin and didn't need much clean-up work. Everything went together easily and fit well. The worst part of the kit was the weapons, some of which required a lot of cleaning and filing to look good. For all the Warlord kits I've gotten I've had to spend a lot of time cleaning up the weapons. For me, they have been the most troublesome part of the kit. That said, the end results generally look pretty good. So, I guess I shouldn't complain too much.

For my models, I decided to use the standard layout and weapons fit. Warlord sells a weapons pack, so you could switch up the armament some and, for the really ambitious, you cut off the minesweeping paravanes and add another gun.

I painted up my ships in mid-gray with a light brown for the decks (the ship colors on the Warlord Games site look sort of blue-gray to me, which seems off). I then attempted to do some weathering on the ship. The decks and superstructure turned out okay (you can see the different planks on each). But I wonder if I was a little heavy with the colors on the side of the ship and for the water run-off holes. I touched this part up several times, but I'm still not sure it looks right. While I generally don't like my vehicles to be factory-fresh looking, I also don't care for heavy weathering. They will probably look fine on the gaming table.

Overall, I like the KFK kit. I would recommend them for anyone looking for a simple German ship to add to the 1/350 scale fleet.