As I flipped over the calendar page to March earlier this week, all I could think was 'Yikes! What happened to February?'

I usually take a break from gaming in mid/late-January, but this year work kept me from doing much in February and I've really been neglecting this blog. So, I wanted to post a quick update on what I've been up to and what I'm planning.

To begin with I thought I'd post this Naval Wargamer 'What I Do" image that I thought was pretty funny (there were a bunch these going around for different wargaming types). 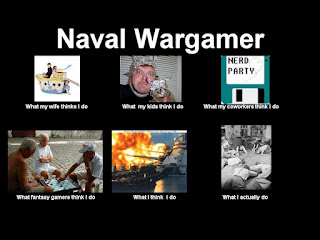 Plans for Enfilade - first off, I'll talk about what I'm thinking about doing for the Enfilade gaming convention. I know Enfilade is still months away, but the way February zipped by, I figure I better get working. Right now I'm looking at running (or helping to run) two games.

For the first game, Kevin and I have talked about what naval game to do for Enfilade and we decided we would run a Strait of Hormuz game with the Bulldogs Away! rules. The basic idea for the game is that Iran has shut down the strait by laying a few minefields and the Iranian Revolutionary Guard Navy (IRGN) has been deployed to stop any attempt to sweep the mines. The U.S. Navy is other side and will deploy some littoral combat ships to sweep the mines and defend themselves from the Iranians. I actually would like to have more options for minesweepers, but I haven't been able to find any good ones in 1/700 scale. But, I have the LCS-2 from PT Dockyard (which is no longer available) and Kevin has an LCS-1 and he recently purchased a plastic version of the LCS-2. So, we have some interesting ships for the U.S. side. The IRGN will have the options of taking the lightly armed, but more numerous, Boghammers, the small C-14 'China Cat' missile boats, and the larger Thondar class missile boats.

There might be some other options for the IRGN too. I'm hoping we can make an interesting scenario of it. However, if our tests of the scenario don't look good or things in the Middle East change to the point that we don't want to do the scenario, we have decided that we will replace this with a WWII coastal forces scenario.

The second game I'm looking at is a Vietnam War search and rescue scenario. It is a scenario idea I've had on the shelf for several years, but never got around to running. The basic idea for the scenario is that a U.S. Air Force CSAR (Combat Search And Rescue) force of A-1 Skyraiders and a rescue helicopter are looking for a downed aircrew.

There will be some F-4 Phantoms in the area too, but they won't have a full weapon load and they will have a limited loiter time. The North Vietnamese will have some anti-aircraft guns, some ground troops, and several flights of MiGs (17s, 19s, and 21s). I'm planning on using the AirWarC21 rules, since I think they have air-to-air and air-to-ground rules, and are easy enough for anyone at the convention to get into.

Other stuff - In addition to making Enfilade plans, I've been slowly (emphasis on SLOWLY) painting up 15mm sailors (American/English and Barbary types) for my Age of Sail stuff. I'm not sure why I have such trouble painting figures, but I always have. So I do a little painting on the figures, wonder why they don't turn out exactly how I pictured in my mind, then I let them sit until I get over that and try again. But, here are a couple "in progress" photos. The Barbary Pirates are from Thoroughbred and the other sailors are from Minifigs (I also have a some sailors from Thoroughbred, but they aren't pictured here).

I'm also following up on a long standing project to do models of American submarines. It has been pretty hard to find them in the same scale, especially for the early Cold War classes. But a company called OKB Grigorov is making 1/700 scale (my preferred scale) models of lots of Cold War subs. So, it looks like this project might be back on track.

Now I just need to make sure I get back to posting regular updates to the blog.