My Other Enfilade Game

The past few weeks I've been concentrating on getting ships done for the Operation Morvarid game for Enfilade 2011. With the missile boats done and the LST in the paint shop, I started looking at what I need for the other game I'm planning on running.

My second game will be a WWII Pacific coastal forces game between the Americans and Japanese. The basic plan is for the Japanese to be on a resupply mission, while the Americans are trying to recover a Marine Recon team in the same area.
﻿The Japanese forces will mostly be armed and unarmed barges (landing craft), along with some luggers. Although I think I will let them trade up to some larger ships, but there will be fewer of them. So, the Japanese players will have to decide if they want to go with more smaller ships that can stay close to shore or fewer larger ships that have big guns (but can run aground). I'm probably going to put together the LST from the Tamiya Japanese Military Transport kit as one of the possible Japanese ships, even though those ships were around until 1944 and the South Pacific battles were pretty much wrapped up by then. I think it would be fun to have it on the table and sometimes you just need to twist history a little. ﻿ ﻿The American forces will primarily be 80' Elco PT boats. As with the Japanese, they will be able to trade the PT boats for other types of ships, such as a subchaser or LCM gunboat. I might even pull out some Fletcher class destroyers as options (although those won't be able to get too close to shore to help pick up the Marines). ﻿ ﻿I'll be using the Action Stations rules for the game. These are one of my favorite set of naval rules; they are easy for players to pick-up, play fast, and are really flexible so I can use them for a lot of different situations.
Things are getting a little busy at my day job, but I'm hoping to have some pictures of the newly painted ships next week.

I finally finished painting the two Osa II and converted Matka missile boats. They still need to be mounted on bases. But since I'm trying to put up a new post each week, I thought I'd show off the painted ships.
﻿The deck color should probably be a little lighter and redish, but I think it will pass. It also give a little variation from some other ships I've done.

Overall, I think the Matka conversion turned out pretty well. When I base it I'll need to figure out a way to show the extra spray when it is foil-borne. I'm not exactly sure what I will do, since I would like to show when it is going slower too.

I went for a pretty standard Soviet era paint scheme for the Osa II boats. The boats paint up well, although there really aren't too many details to pick out on the Skytrex models. That said, the boats are pretty sturdy and I expect they will see a lot of service in various games. 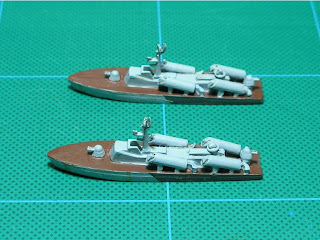 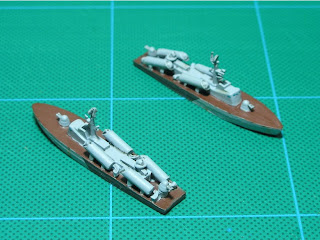 I finally finished up the basic work on the LST. I spent about a half-hour with an electric hand-sander getting the hull down to the right size and then began working on the superstructure. I used the styrene strips to create the superstructure, bridge (including the wings), exhaust stacks, and mast. I then added some light guns, a crane, and a ships boat to add some character to the LST.

﻿The right side of the LST got scuffed when I was sanding, but a little putty will fill it right in. I think it will give the ship a used look.
﻿Here is a low-level profile picture so you can see how big the LST is compared to an Osa II.

Overall I'm pretty happy with the scratch-building job I did. It would have been nice to make it a little bigger, but the size should work with most of the games I'll be playing.

I've been a little slow in finishing up the LST for my Enfilade scenario, but I wanted to post a short update with a few picture of my work.

First off, just a short review. I'm scratchbuilding an LST based on the Iranian Hengam class, but my version will be a little shorter. A real 1/700 scale ship would be over 5 inches long, while I'm cutting mine back to 4 inches. So the final version will look a somewhat squished.

I'm using 1/4 inch basswood as the base of the hull. I originally glued two pieces together for the hull, but later figured out that would make the ship too tall (I had to go back and revise the design a little after these pictures were taken). Below you can see the original base hull design.
After getting the base hull done and sanding it to be a little smoother, I added some sheet styrene for the main deck and the raised forward part of the ship.
Now I was ready to add the side of the hull, which will be done with very thin sheet styrene. I used a continuous piece of styrene that wrapped around the right side, the bow, and then the left side. I will cover the aft end later.
﻿It was really at this point I decided the ship was too tall (I should have figured this out earlier, but didn't). I need to reduce the height by about 1/8 inch. It will still be a tall ship, but I think it will look better. Right now I'm working on reducing the height and I'm building the superstructure for the ship.

I will have some more photo updates of the LST and the painted missile boats, including the modified hydrofoil, next week.


Finally, I decided to buy a few things during the PT Dockyard's Winter Doldrums Sale. I got a few Taiwanese missile boats (those are for a later project) and I got a USS Independence LCS-2 ship. I had procrastinated on ordering my ships and Dave had removed the LCS-2 from the website just when I was sending my order (if you check the website you will see that it is no longer there). After a few e-mails back and forth, he said he would make one last ship for me. I thought I would share some pictures of the ship.
﻿It is a really big model (and uses a lot of resin), especially when compared to most of the missile, PT and gun boats PT Dockyard makes. It measures almost 7 inches from bow to stern and the back end is around 1 3/4 inches wide. There are a lot of panels and doors on the sides of the ship (I'm not too sure how they look in the photo, but you can click on it for a slightly larger view). Here it is in comparison on to some of my bigger 1/700 scale ships. ﻿ ﻿The LCS-2 is a nice looking model, but because of its size and amount of resin that goes into each one, I can see why it is being retired from the PT Dockyard line. I'm looking forward to working on the model, but not until I finish my Enfilade projects.
Posted by Dave S. at 8:16 PM 5 comments: