After a couple busy weeks, I'm finally posting about the stuff I picked up at Enfilade and my plans for this summer.

I didn't have many planned purchases for Enfilade. Last year Kevin and I decided we would get some Galactic Knights ships to mess around with, so I wanted to stop off at the Monday Knight Productions tables to pick up a 3 ft x 3 ft star map and some spaceships. There wasn't anything else I knew I wanted to get, I just thought I'd see what else was available.

Monday Knight always has a deal at Enfilade where you can buy miniatures by weight and I ended up with around a pound of ships (about 20 smaller sized ships) for around $50. Overall it seemed like a good deal.

I also checked out the Bring-and-Buy tables for some deals (you really have to go by those tables several times a day, since the stuff on sale changes as people come and go). There was a lot of interesting stuff there, but initially I didn't see anything that I thought I really needed. But on Saturday someone showed up with a bunch of 25mm sailing ships. Most of them were already painted up as pirate ships, but there were a few that were unpainted and unassembled. My friend Mark found one of those, pointed it out to me, and I decided I couldn't pass it up.
The ship is about 14 inches long and while it was made for 28mm figures, I think it will fit in fine with my 15mm figures. In addition to the hull, it came with masts, guns, and a bunch of fittings. Overall, it was a steal at $25.

My final gaming purchase (I made lots of other purchases of beer and food) was a boardgame called Flash Point Fire Rescue. 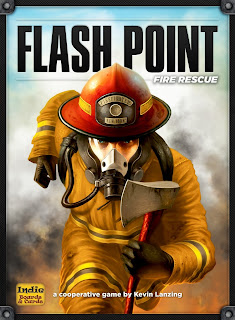 I had been looking at this game for a while and finally decided to go ahead and buy it. The game is a cooperative game where you play firemen putting out a house fire. It seems like a game I can get my wife and other people to play, but I think it could also be converted into a miniatures game too. That would be a little side project.

Summer Plans
With summer here, my gaming/painting time will become more limited as my wife appropriates more of my free time for yard work and other tasks. I also have agreed to do some design work for a new boardgame, which will take more time away from gaming/painting. I also have some relatives visiting in July and August, and, finally, I offered to give a presentation on first generation Soviet nuclear submarines to my submarine veterans group this month.

As you can see, a lot of my free time is already committed. But I'm hoping to get some work done on my various projects and get in some gaming. I did offer to put on a War of 1812 Lake Ontario game for the Truants gaming group in July. So I've at least got some gaming planned. Hopefully, I'll be able to join them for some other games too.

Overall, it looks like I've got a busy summer.