The DANG (Dave’s Annual Naval Game) 2014 game was Cogs of War: The Hundred Years War at Sea. While sounds big, the mini-campaign really only covered actions in the English Channel in the summer of 1340. Historically, the French had spent the last two years conducting raids on English cities and disrupting trade. At the end of the previous fighting season the English had repelled the French raids and stabilized the situation. This set the stage for a new set of battles in 1340 and would lead to the decisive Battle of Sluys. Our game would see if the English could recreate a historical win.
Everyone began arriving at my place around 9:00 AM and we spent the next hour catching up on things, talking about the projects we are all working on and planning, and munching on some breakfast snacks.

After a short review of all the rules (we used David Manley's unpublished Medieval naval rules, which include fleet level rules, tactical rules, and the campaign rules), we split up sides for the game, with Scott, Dale, Mark and George playing the French and David S., Kevin, Arthur, and Dave C. playing the English. Each side then took some time to review the positions of their fleets and plan out their strategy. The campaign could be a maximum of 30 turns, with each turn representing approximately 3 days, and we would start rolling at turn 25 to see if the game ended early. With everything ready to go, I set up the campaign map and scoreboard. 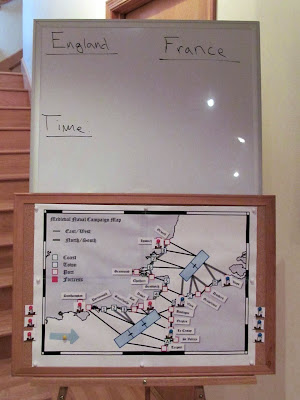 Here is a better view of the map
Both sides started off by sending raiding forces across the channel. The English also caught a French force at Le Crotoy, but the French we able to win the initiative and avoid battle.
Raiding continued for the next couple of turns, with the English scoring more points than the French, and almost catching the small French force (once again the English could not win the initiative to force a battle).
On turn four the French moved a large force to combine with the smaller one that had been avoiding the English and charged to attack. Once again, the English failed to win the initiative and were forced into battle against the larger French force.
We set up the battle, but before starting the tactical battle we took a break for some food.
As you can see, we had some appropriately themed potato boat snacks. To paraphrase a famous naval quote: "We have met the enemy and they were delicious." There was some talk about using the potato boats for gaming, but we decided to eat them instead. Although that would bring a new meaning to the term “Food Fight.”

After the break it was on to the battle. The English had one crippled stand (from a semi-successful raid) and were hoping to do a little damage to the French and then break-off the battle. The French were just hoping the English wouldn’t just run away. The French set up to try to catch the English right, with a force of galleys leading the charge.
The English sent a couple medium cogs were sent to take on the galleys and were able to cripple one with missile fire.
But the galleys were still able to close with the cogs and sink one. Note the missing cog below.
Over on the other side of the battle, the English decided to abandon their crippled cog to fate, hoping it would slow down the oncoming French.
But there wasn’t really much it could do by itself and it was quickly dispatched.
Back on the right, a French squadron of small cogs was closing on the main English squadron and King Edward ordered a couple medium cogs to take them on. One of the French galleys moved to help out the small cogs, while the other two galleys attacked another cog.
A real scrum was developing on the right, which threatened to hold up the English line and allow them to be caught by the main French squadron.
Luckily for the English, they were able to dispatch the galleys to clear the way, while the two medium cogs fought a rear-guard action against the French small cogs. The French were able to sink both medium cogs while the rest of the English fleet escaped. At the end of the battle, the English had lost four medium cogs and one small cogs (the cripple from the start of the battle), while the French losses were three galleys. At the end of the battle the scoreboard looked like this.
At this point both sides seemed to take a new look at their strategy for the game. The English thought their best strategy would be to expand their raiding (since that’s where most of the points were). The French were also thinking about more raiding, but still felt they needed to do something to drive off the English. Both sides were moving into better raiding positions when disaster struck the French.

On turn seven a Storm random event hit the French fleet that was raiding the English coast causing the sinking of a large cog and the crippling of five medium and one small cogs. This was a major blow to the fleet. This was followed up on the next turn by a Widespread Storms random event that hit all the fleets in the game. Once again the French suffered a number of crippled and sunk ships, while the English only had a couple crippled ships. The storms also disrupted movement, preventing the French from getting to good raiding areas, while the English were already in good places to raid.

By this time the English had been very successfully raiding the French coast and were running away in victory points, so the French players decided it was time to concede the game. The final score was 52 to 19, for a big win for the English and the storms of 1340.
Overall I thought it was a fun and interesting campaign. I think everyone enjoyed the game, although the French players certainly had a ‘what is going to happen to us next’ look about them at the end.

I need to look at rules on the battle setups again to see if I did something wrong there and there were a few suggestions about the raiding rules, but overall we liked how the games played out. The game could have gone either way until the weather intervened and disrupted the French plans.

I've been (slowly) getting everything together for the DANG (Dave's Annual Naval Game) Cogs of War game.

I wanted to have them blend in with Kevin's ships, so I got a couple photos of Kevin's ships for measurements. I built mine in a similar technique to Kevin, using basswood as the main construction material. However, but I built them with a lanteen rig instead of the sqyare rig Kevin used. I didn't take any 'in-progress' photos (I thought about it, but I didn't really use any special building methods, so I didn't think construction photos would be very interesting), but here are a couple photos of the completed ships.
The other change I made was to use cardstock for the rear canopy and for the oar banks. I wanted to give the impression of lots of oars, but I didn't want to cut individual wires for them. I thought I would try a different method by cutting the cardstock with a sort of fringe pattern. After cutting and gluing to the hulls, it looked okay. But I wasn't sure how the oar banks would turn out one I applied some paint (this was really a big experiment). As you can see from the photos (click on them to enlarge them), everything looks okay. Although the photos make the oar banks look a little more red than real life (probably something to do with the lighting I used when taking the photos). The galleys and oar banks are nothing spectacular, but it does give the impression of a lot of oars (similar to how a lot of cast models look). So I'm going to count it as a success.

Now I've just got to finish the paperwork for the game (maps and order of battle information). Then the final shopping for victuals and set up the house for the game. The campaign is set to run on December 27 and it should be an interesting game. I don't think too many of the attendees know a lot about fighting with cogs (well that sort of goes for me too), but, as always, I'm still expecting a fun and interesting game.
Posted by Dave S. at 5:46 PM 1 comment: