After starting up this blog I told myself that I wanted to try and get a new post up at least every couple of weeks. I thought that would be a good (and easy) goal to shoot for, but after not getting a post up for more than a month, it seems like I was wrong. Well, hopefully I will be able to change that and get back on a reasonable schedule for updating the blog.

Over the past several weeks I haven't been working on much hobby stuff, but here are a couple things that are going on that I want to pass along.

First off, NHMGS (the Northwest Historical Miniatures Gaming Society) is putting on a Game Day at the Museum of Flight in Seattle on Saturday, November 6. 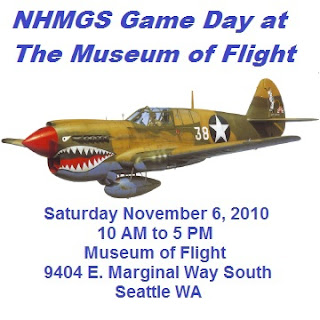 NHMGS has been running a game day at the museum on and off for the last ten years. There will be five game tables and two gaming periods. The games will cover a lot of different topics; not just air related games, although there will be several of those. Right now the games include: air racing, World War II air and land action, World War I air action, and ancient battles (using DBA). Additionally we will have an information table with reference books, rules, and miniatures on display.

It is always a good time and we are expecting around 25 NHMGS members to be there to show the flag. If you are in the Seattle area on Saturday, you might want to stop by the museum and have a look or even stop and play. You can find out more about getting to the museum at their website. 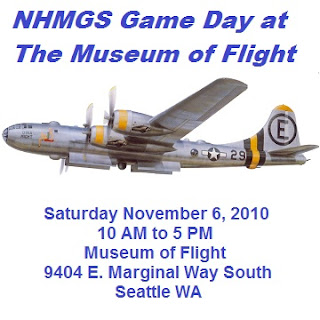 Second, I am preparing for DANG (Dave's Annual Naval Game) 2010. Every year since 2002 I've run a naval mini-campaign for my friends between Christmas and New Year’s Day. We've had some interesting games in the past, ranging from the Spanish-American War, to World War I in the Adriatic, to World War II and modern actions.

After the first couple of years I started to let people vote on the game they wanted to play. I would come up with a list of around ten potential games and let everyone vote on what they wanted to play. This year's voting was done at the start of October and was done in two rounds. The first round had ten games and the second round had the top four games from the first round.

This year's winner was the 1571 Lepanto campaign. 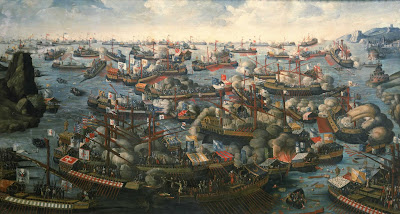 The game will cover the last large-scale galley battle in history. In the mini-campaign I'm planning on trying to cover the approach to the battle and the main battle itself, with some options for both sides. Although if players make different enough choices from their historical counterparts, the battle may not happen at Lepanto but somewhere else. I'm planning on using the "Christen Fire and Turkish Fury" rules (this is a naval variant of the Fire and Fury rules by David Manley) and the Figurehead 1/2400 scale galleys. I've got my order for the figures in at Strange Cargo Games and I'm just waiting for them to show up at my door.

Finally, following up on my Age of Sail stuff. I'm still working on the ships and the gunboat and cutter are about half-painted, but other, non-hobby, stuff has kept me away from finishing them. I'm hoping to get a little more work done on them before I get heavily into painting for the Lepanto Project and will post pictures when they are done.