Looking at Rules: Kiss Me, Hardy 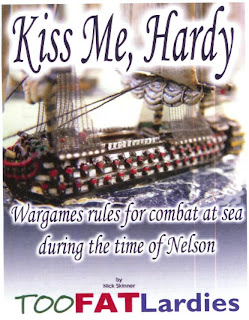 In my search for a good set of rules of rules for my 15mm Age of Sail ships (you can read about other rules here, here, and here), I finally decided pick up a copy Kiss Me, Hardy from Two Fat Lardies (TFL). The Lardies have a good reputation for their rules, so it seemed like a low risk purchase. With that in mind, here is my overview of the Kiss Me, Hardy rules (I should also note this overview is based on reading through the rules and some solo walkthroughs of a game).

Kiss Me, Hardy comes as a 50 page PDF file, but there is a lot of white space and partial pages so the rules aren't really that heavy. The rules are designed for use with 1/1200 scale ships, but the author says they can be used with other scales. However, I don't think he was thinking about the 15mm ships, which is what I am looking for. Ranges in the game are measured in cm (but I expect you could modify this if needed) and the game primarily uses D6s, but there are times you will need some other dice.

Like other TFL rules, there isn’t a set turn sequence; instead a deck of cards (you have to make these yourself) is used to determine what action is taken. There are cards for checking wind change, resolving boarding actions, and each squadron/formation has a Move card and Fire card. When a card is turned up that action is resolved. However, a player can hold back their Fire card for use later in the turn, but it must be played before the next turn.

For movement, each ship rate (based on the number of guns) has a base movement number ranging from 10 cm for 1st rates to 16 cm for small ships (sloops and cutters). The base movement is modified by die rolls (D6s) based on the wind position for the ship. Turning is handled through the use of a turning circle. There are special rules for tacking (turning through the wind), maintaining formation, and collisions. Overall, the movement rules are pretty easy to deal with.

For firing, the base number of dice (D6s) for broadside firepower is based on the number of guns on the ship, ranging from 14 dice for 120 gun ship to 2 dice for a ship with less than 20 guns. The base number of dice is modified by crew quality, if you are firing a full broadside, and a few other factors. The “To Hit” roll is based on range. In addition to the normal fire dice, you also roll a D10 for special damage. If the D10 roll is less than or equal to the number of hits rolled, special damage is checked on the target. When firing, the player declares if they are shooting at hull or rigging and each hit does 1 damage point. Ships hull hits are based on the number of guns they carry (a 74 gun ship has 74 Hull hits and a 36 gun frigate has 36 Hull hits). For rigging, ships have Primary and Secondary boxes based on their movement (there are three Secondary boxes in a Primary box). Most rigging hits mark off Primary boxes, but sometimes Secondary boxes are marked.

Once ships start taking damage, there will be times when the ship is required to make a Strike Test (basically a morale check). If the ship fails the test, it must retire from action or (in certain cases) will surrender to an enemy ship.

If two or more ships are locked together, they can fight a boarding action (when the appropriate card is turned). Each side rolls D6s (1 for every 10 remaining Hull hits) and adds them together, with the highest total winning the stage. This continues until all the decks on a ship are taken or the defenders throw the attackers back.

That covers the basic rules for the game, but there are also rules anchoring, running aground, small boats, galleys, fireships, bomb vessels, shore batteries, static defenses, and even land actions.

Another good rule (in my opinion) is the Ship and National Characteristics rule. This covers crew quality breaking crews into three groups (Jolly Jack Tars, Sans Culottes, and Landlubbers). Each group can further be broken down into Elite, Average, and Poor (exception, there are no Elite Landlubbers). I really like this rule since it gives eight basic crew levels without adding a lot of rule text. Another nice touch is the optional rule for modifying vessels, which allows for some further customization of ships.

The rules play pretty fast and should work well for large and small fleet actions.

Cons: Standardized ships and guns (this is okay for the scale used), PDF download (this can be a pro or con depending on your point of view).