As part of my last post of 2012, I wanted to talk about a few books I read during the year. None of the books are very new and I'm limiting this post to ones that might interest naval gamers. 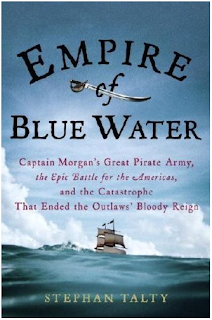 Empire of Blue Water: Captain Morgan's Great Pirate Army, the Epic Battle for the Americas, and the Catastrophe That Ended the Oulaws' Bloody Reign, by Stephan Talty

This book covers the exploits of Henry Morgan during his 30-year career as a pirate/privateer in the Caribbean. The book primarily covers the Morgan's attacks on the Spanish Empire at sea and on land, including his attacks on the major Spanish ports in Panama and South America. It also looks at the general political situation in the Caribbean during that period. Talty talks about the difficulties of organizing pirate expeditions, maintaining control of those men, and what happened after the expedition. Talty also notes early in the book that not a lot of records were kept from this time, but he does a good job of filling in details. Although one thing I didn't really like was that he invented an ordinary pirate character for the book that he would use to explain the difficulties of the common buccaneers. I thought this was the least effective part of the book and could have been explained just as well without the invented character.

Empire of Blue Water is a nice little history of the Caribbean in the late 1600s. For gamers, it gives lots of ideas for pirate raids and what the troops (pirate and Spanish) were like. 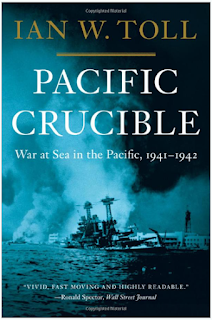 This is Ian Toll's second book. His first was the wonderful Six Frigates, which covered the early history of the American Navy, so I was expecting a lot. After the wide-ranging time frame covered by Six Frigates, I was a little disappointed that Pacific Crucible was only covering 1941-42 (and only from Pearl Harbor through the Battle of Midway). But that disappointment soon disappeared as I got further into the book. Rather than just covering the same basic military history of Pearl Harbor, the early American responses, the Battles of Coral Sea and Midway, Toll delves deeper into how these historical events came about and the strategic views for each side. There is a really good explanation of the Japanese thoughts and goals, including how the Army and Navy took over the Japanese government and their general lack of cooperation with each other. There are good sections on Admirals Nimitz, King, and Yamamoto, along with the relationship and meetings of Churchill and Roosevelt. The book also draws on a lot of eyewitness accounts for the battles.

I found Pacific Crucible to be a quick and interesting read. Even if you are familiar with the first six months of World War II in the Pacific, I think you will read something new or see events with a different twist. I'm hoping that Toll will continue writing the history of World War II in the Pacific, but I think it will take a lot of time to do that in this level of detail. For gamers, there is some good information on the Wake Island relief force and other early American raids that aren't gamed very much, along with there are lots of little ideas that can be added to your games. Overall I really enjoyed the book and recommend it. 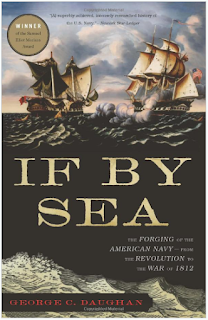 If By Sea: The forging of the American Navy - from the Revolution to the War of 1812. By George Daughn

I reviewed Daughn's 1812 book in another post, but never posted anything about his first book. As the subtitle says, this book cover the American Navy from the American War of Independence (AWI) through the War of 1812. The thing that really sets it apart from the other books on the early U.S. Navy is the focus on the AWI time period; about half the book covers the period from 1775 until 1783. Daughn does a good job covering the wide variety of ships and actions during this time, from Boston Harbor to the Bahamas raids and John Paul Jones. The book is worth reading for those sections alone. Which is a good thing, since the book only covers the next 30 years in broad strokes. It hits on all of the major actions and events, but not in much detail. It isn't that the writing or information is bad, it is just done better in other books.

If By Sea gives a good overall history of the American Navy through 1815 and especially during the American War of Independence. I felt the last half of the book wasn't as informative as the first half, but that might only be because of other books I've read. For gamers, there is a lot of different stuff here, although they are all pretty small actions.

2012 in Review
Looking back on what I posted about plans for 2012 (look at the end of this post), I did get through some but not all of them. I didn't do very much work on my 15mm Age of Sail stuff, but I did complete a bunch of 1/600-1/700 scale ships and some of the 'grab bag' items (the Galactic Knights spaceships and some aircraft). So, it was too bad of a year. I haven't really thought about projects and plans for 2013. I will probably just pick out a few projects here and there without any set goals in mind. I do need to figure out what I want to do for Enfilade 2013(I've already got some ideas kicking around). Drumbeat 2013 is coming up in mid-January, but I think I will just attend and play games rather than running games.

Finally, I want to wish everyone a Happy New Year and thank you for reading my meandering posts and adding comments.