Last Saturday (November 16), NHMGS held a game day at the Flying Heritage Collection at Paine Field in Everett, WA. It was a great chance to interact with the public, but it was also a little bit of a challenge to put this on since we just had the event at the Museum of Flight a couple weeks ago. NHMGS is hoping to have more of the events at the Flying Heritage Collection, but also hoping to shift the date so it isn’t quite so close to another event.

The Collection has some really nice aircraft, such as this P-40C done up in Flying Tiger colors (the description plaque said this plane was actually in Soviet service, but I can understand them going with the more well-known AVG markings). 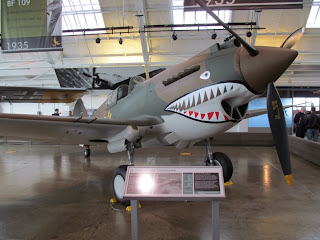 We were set up in the Flying Heritage Collection’s second hanger, the one with the tanks guns, and split into a couple areas.
It was interesting to see games being put on with some actual World War 2 vehicles looking on.

Kevin and I put together a couple small coastal force actions, one in the Pacific and one in the Mediterranean, for the event. So I was pretty busy throughout the day. But I did manage to grab a few photos of the games and items around the Flying Heritage collection.
Overall, it was a fun day and I’m looking forward to the next one.