When I started this blog my goal was to post something at least once per week. While it seems I've failed to meet that, I have been working on some naval related stuff, just not miniatures stuff.

Besides real-life work (the kind that allows me to buy miniatures) and the normal around-the-house chores, I've been doing some work on a couple boardgame projects involving U-boats. One involved playtesting while the other involved doing some design work. I'll post more information about these when (if)they get closer to being completed.

As for my summer projects, the 15mm Age of Sail stuff has been temporarily side-tracked by the other projects, but I hope to return to it in the next week or two. I have done some more research on the St. Nazaire raid project that Kevin and I have been talking about. One of the biggest things I needed to figure out was how much space the game would take up. So I found some maps of the area of the raid, figured out how much I would like to see covered in the game, and then convert that into game scale. I've been using the map below as my basic guideline for the raid (I have other maps and books, but it is easier to show this one on the blog). The area marked in the red box on the map pretty much covers the main areas of action during the raid (although I might shift the box to the right a little) and works out to be about 1,600 yards by 600 yards. 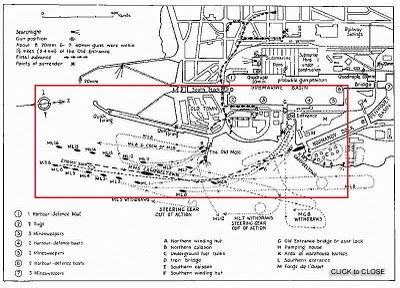 Since we are planning on using 1/600 scale miniatures for the game, that seemed like a good place to start. In this scale 1,600 yards by 600 yards works out to about a 8 foot by 3 foot space which fits right in with most tables for a convention (a general table size is 8 foot by 6 foot) and the extra space in the width would give a little more room into the river and maybe an out of the way place to put figures and ships. I also measured out that area using the scale given in Action Stations (2 yards = 1 mm) and that gives an even smaller space, but right now I think we will stick with 1/600 scale since that is the size of the ships and we can get some terrain in that scale.

The next step for this project will probably be sitting down and figuring out what terrain items can be bought and what needs to be made. I'll have to set up a time to meet with Kevin where we can talk about this and maybe walk through a session of the Avalon Hill game on the the raid.

Hopefully I'll be able to get back on track with the 15mm Age of Sail stuff too. On a side note, I added the Naval History Blog to my blog list on the right. While it is primarily US Navy history, it does have some interesting information and may provide a little inspiration or project ideas.