As part of my research for the Up the River mini-campaign, I read through a couple short histories on American Civil War naval actions and I thought I'd share my thoughts on these books, along with my thoughts for 2012. 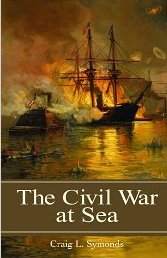 The Civil War at Sea, by Craig Symonds

Craig Symonds has several good books on Civil War naval topics and this book provides a good overview of all the aspects of the naval war. The book starts out with a discussion of the ships, guns, and other technologies for each side of the conflict. Symonds does a good job of explaining the strengths and limitations of each side and the impact of new technologies. The book then goes into chapters that cover the Union's blockade strategy and Confederate blockade runners, the Confederate war on commerce, naval forces on the western rivers, and operations against the major Southern port cities. The book does a really nice job of explaining the difficulties the Union had in coordinating ground and naval forces to implement the overall strategy, but it doesn't skimp on the view from the Confederate side.

The Civil War at Sea is a short book, only around 200 pages, but pack a lot of information into those pages. This is one of the best one-volume books on the naval portion of the Civil War that I have seen and I would recommend it. It is a good book for people just starting to read about the subject or for those that want a single reference book. For gamers, it provides enough information to create your own scenarios, historical and hypothetical. Overall, lots of good stuff is in the book. 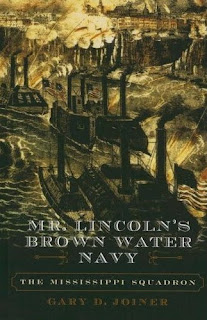 This book provides a good general history of the Union naval efforts on the western rivers. It provides information about the organization, ships, and men of the Union riverine navy. There is some good discussion about evolution of the Mississippi Squadron from a few ships under Army command to a full squadron under command of a Navy flag officer. The book covers the major and minor actions for the squadron, there is a whole chapter devoted to the Red River campaign, along with the action of the Navy's blue-water squadron that captured New Orleans and came up the Mississippi.

Mr. Lincoln's Brown Water Navy is a short book, around 225 pages, and is an interesting read. While the book doesn't go into great detail about the different ships in the squadron, it does have lots of information about the different battles and minor actions that can be fodder for gaming ideas. This is a good book, but I would only recommend it if you have an interest in the riverine battles. However, I do think it is a good complement for Symonds The Civil War at Sea.

Plans for 2012
While it seems obligatory for gaming bloggers to write something about plans for 2012, I have to admit that I really haven't made any. There are things that I want to work on (it is really an unending list), but I'm sure there will be stuff the pops up at the last minute that will draw my interest. With that in mind, here is a short list of the stuff I'm thinking about for 2012.

15mm Age of Sail ships and figures: This is an on-going project that I really need to get back to. I've got several ships and lots of figures ready to paint, but for some reason I just haven't been able to motivate myself to go back to them. It would probably help if I could find a set of rules I really like. The new 18mm line from Capitan Miniatures look interesting and I'm sort of hoping they find and American distributor. But I really need to finish up the stuff I have before buying more.

1/600 and 1/700 scale ships: I'll continue to expand my line of WWII and post-WWII ships for small scale actions (using Action Stations and Bulldogs Away). I really like this scale and the battles I've come up with are usually a lot of fun. I will probably add a few ships for Enfilade games and to round out my collection. I would like to see more modern Chinese ships in the scale (Are you listening P.T. Dockyard?) and some others for doing hypothetical battles in the South China Sea and Spratly Islands. Additionally, I should get back to the Raid on St. Nazaire project that Kevin and I have talked about.

Grab Bag: I need to go through my miniatures box to see what is there. I keep thinking I would like to get back to doing some air battles, but don't have anything specific in mind right now. Kevin and I are also tinkering around with the idea of playing some small space battles using the Galactic Knights rules (yes, I know I bought a Super Galactic Dreadnought at Enfilade 2011, but I'm not sure how deep I want to get into this). There are also a few other things kicking around, but I doubt I will get to them in 2012.

Wishful Thinking: One project I have always wanted to do is a modern submarine game. I've collected a lot of the 1/700 scale plastic model kits (which only provided a limited number of submarine types) and over the past few years I've been watching the growing line of 1/700 scale resin kits from OKB Grigorov. They have actually come out with a pretty extensive range of Cold War and Post-Cold War submarines (U.S., Soviet/Russian, British, and German). 1/700 scale might be a little too large to actually game with, but it could be fun. That is, assuming that I could find a set of rules that worked for that scale. So, until I find some extra time and money, this will just remain on the "Wishful Thinking" list.