The game for this year’s DANG is an American Civil War river game and since I’ll be able to borrow the ships for the game, I decided to invest in a little terrain. In this post, I’ll cover the different buildings I picked up for the game.

I searched around for some 1/600 scale terrain that would work for an ACW game and hopefully work for other eras. I found a couple places that had what I was looking for, Bay Area yards, in their Riverside Structures section, and PicoArmor, in their PicoTerrain line.

From Bay, I ordered four houses (two each of their “Two-story house with porch” and “Two-story house with extension”) and a small warehouse. I also got a four-piece dock set, the raft/barge set, and a centerline paddlewheel ferryboat, but I’ll talk about those in another post. The houses, made from resin, all look pretty nice and there was only a little excess resin that needed to be cut/filed off. The house sides are smooth (except for the extension, which has etched lines for the wood panels) and the windows all have open shutters. The only possible issue I saw is that they seem to be a little big for 1/600 scale houses. But since they are only eye candy for the game, it shouldn’t really matter.
The small warehouse is also looks good. Like the houses, it has smooth sides and window shutters, but the roof has some etching.

These are a little rougher and smaller than the Bay houses. They are also resin and needed a little more clean-up than the Bay houses, but still nothing major. That said, the PicoArmor houses look like they should be two-stories, but they are only about ¾ the height of the Bay houses. However, they all seem to mix together. The PicoTerrain houses look like they have plank siding and stone chimneys. The way the siding is done makes it easy to do use dry-brushing to bring out the details.

Here are a few pictures of the houses and warehouse laid out as a disorganized town. 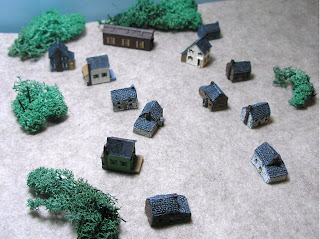 You can see some of the size difference between the different manufacturers. 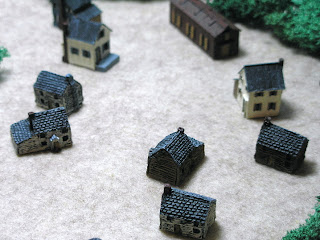 But all the houses seem to go together pretty well and I doubt anyone will question the differences. 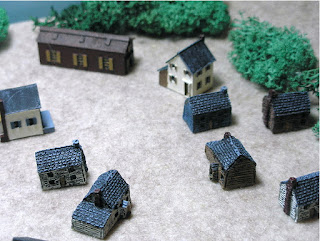 Overall, I’m pretty happy with the building and I think there are enough differences to make an interesting town.