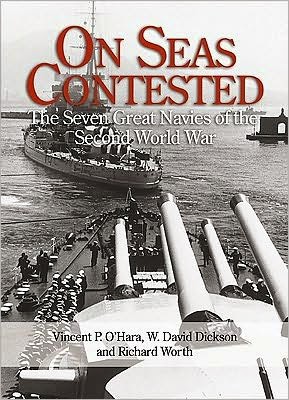 On Seas Contested is a joint collaboration by seven different authors and three editors covering the major naval powers during World War 2. The book has chapters on the navies from the United States, Japan, United Kingdom and Commonwealth, Germany, Italy, France, and Soviet Union. While there are a lot of books on the navies and naval actions during World War 2, I can’t think of one other book that compares all the navies at this level.

The editors set up a chapter outline for each author to follow covering each navy’s: History, Mission, Organization (including personnel and intelligence), Doctrine (surface, air, submarine, anti-submarine, amphibious, trade protection, and communications), Material (ships, aircraft, weapons, and logistics), and an Assessment of the navy’s wartime operations. The authors all worked independently, so every now and then some information is repeated between the chapters. However, it is not repetitive but is used to illustrate the different views each navy had on the information. Each chapter has a lot for anyone interested in naval history.

I found the sections on Doctrine and Material particularly interesting, since not every navy planned to fight in the same manner and knowing those differences really shows why certain decisions were made when procuring ships, aircraft, and weapons. I also thought the section that provided the assessment of wartime operations was interesting. That section wasn’t just a rehash of winners and losers; but an evaluation of how a navy performed given its pre-war plans and wartime changes. I really though all the authors did a good job of assessing the performance of the navies. It was also interesting to see information on the French and Soviet navies. Those two are often neglected when talking about World War 2 naval operations.

Overall, I enjoyed On Sea Contested and thought the authors did a good job getting all the information into the pre-defined outline. However, because there really isn’t much on battles, this probably isn’t a good book for the casual naval historian (if there is such a person) and I certainly understand that not everyone is interested in how the Italians trained their sailors or Soviet’s anti-submarine warfare plans. But if you are interested in reading information on why navies did certain things during the war, this is a book for you.

For gamers, this book can provide ideas for setting up victory conditions and orders for naval actions. It can also give you some ideas for special rules for different navies should operate.

Finally, there is a website for the book that provides backgrounds on the authors and editors, along with some extra material and links to primary sources and other naval websites. Even if you don't get the book, the On Seas Contested website is worth a look.