Looking at Rules: Away, Boaders!

In this post I'll be looking at the Away, Boarders! rules. 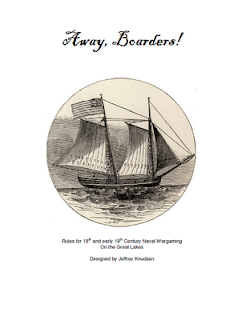 Away, Boarders!
Away, Boarders! is a free set of rules from the War Artisan website. The rules cover naval warfare on the Great Lakes during the 18th and early 19th Century. The rules don't really give a scale, but are meant to be used with the 1/300 scale paper ships, although the author does say they can be used with any scale. The rules are about 13 pages long (including instructions for creating your play area) and the zipped download file comes with the rules, markers, and tables. There is a separate zipped file for the ship displays for the Battle of Lake Champlain in 1776 (probably better called the Battle of Valcour Island so it isn't confused with the battle during the War of 1812). In addition to the play area, miniatures, and ship displays, you will need a number of six-sided dice (the rules recommend a half-dozen).

The rules start out by explaining how you set up the field of play by putting points (dots) on the play area in a basic hexagonal pattern. The distance between the points is based on the size of the largest ship model in your game. The rules then explain the layout of the ship displays and how to use the markers with displays.

During Crew Assignment players move their crew markers to different sections of the ship display to show the actions they are taking (working with sails, loading guns, repairing damage, etc.). Then each ship determines its current speed, based on the ship rating, sail setting, and facing compared to the wind. Movement and gunnery are done in the three Action Phases. The Action Phases are basically movement impulses with ships taking zero, one, or two movement actions depending on how fast they are moving.

After moving, any ship can fire its guns and all damage is recorded simultaneously. Ships can choose to aim high or low with damage based on the number and size of the guns, the range to targets, and gun load (standard shot, double shot, grape shot, or chain shot). Guns in range will basically always hit, with the number of hits (damage) being varied by a die roll. After determining the number of hits, you roll to see hit location. When a ship loses all of its Hull boxes, it sinks. I didn't see any morale rules in Away, Boarders!

Boarding happens after movement when ships grapple or are fouled. If boarding occurs, only the crew members assigned to board/repel boarders count during the fight. Boarding is resolved by adding up the number of crew assigned (officers count double and the rules don't cover marines) and rolling a die. The side with the high total wins and the losing side places one crew marker in the casualty box. If the boarding party outnumbers the remaining crew by 3 to 1, the ship surrenders.

One interesting aspects to these rules is that when the crew takes hits they are placed aside as crew casualties and instead of being eliminated they can be returned to action by the ship's captain rallying them. This rule and the crew assignments gives Away, Boarders! a different feel than most rules where you don't really care about what is happening with your crew. I sort of like this aspect of the game, since ordering your crew actions seems like it should be more important with the smaller scale actions.

Overall the game seems like it will be pretty easy to play. There are a some aspects to the gun damage that I not too sure about (the shot weight is a modifier for damage, but the modifier can't exceed the number of guns firing. So a single 32 pound gun would do the same amount of damage as a single 6 pound gun, which seems odd). But there are aspects of the rules I like and I'm looking forward to giving them a try. Here is a short list of the pros and cons I saw with the rules.

Pros: ship displays and markers, crew assignments and handling, guns are differentiated by size/weight and boarding actions are quick and easy.

Cons: uses point-to-point movement instead of free-movement, no rules for changes in wind direction/speed, and no information on how to come up with ship displays for ships not included in the Lake Champlain file.

Next up Limeys and Slimeys