Looking at Rules: Limeys and Slimeys

In the final installment of my rule overviews, I'll look at the Limeys and Slimeys rules. (I wanted to include a photo of the rules cover, like I did with the other overviews, but there really isn't a cover. So, enjoy this picture I found while searching for sailing ships on the Internet.) 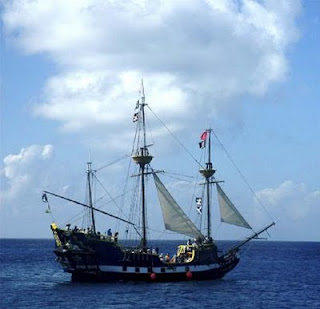 Limeys and Slimeys
Limeys and Slimeys is an older set (copyright 1990) of quick-play naval rules. I think they were originally included with ships from the miniatures line of the same name. You can still get the rules, crews, and some ships from GFI Minifigs in the US (look under the 15mm Renaissance heading for the figures and rules). The rules are about four pages in length and there is a two-sided quick reference sheet. The rules do have some suggested values for hull, rigging, and crew sizes. In addition to the play area, miniatures, measuring devices, you will need a number of six-sided dice, and a way to record hull and rigging damage. Unlike the other rule sets I've been looking at, the small crew sizes in Limeys and Slimeys let you use 1 figure for each crewman (the largest ship they suggest is a 14 gun ship with 24 sailors and 4 officers, to which you could add in 8 Marines with a Marine officer).

Movement is done in two legs at a rate of 3 or 6 inches per leg (depending on how you are facing with the wind). Turning is done in increments of 45 degrees after a movement leg and there is a rule for tacking through the wind (with the chance of getting hung in irons). One interesting twist is that you can actually gain speed after your turn if you put the wind at your back.

Gunnery can happen any time during the moving player's turn (no opportunity fire here). Guns are basically classed a long guns or carronades. Long guns shoot out to 24 inches and do one point damage for each hit. Carronades can only fire to Short range (6 inches), but do double damage when they hit. There are three basic range bands: long (24 inches), short (6 inches) and Point Blank (3 inches). When a player is ready to fire, they roll one die for each gun firing, check for hits, and then roll damage for each hit. When a ship loses all of its Hull boxes, it sinks. I couldn't find a rule for morale checks, but the reference sheet mentions that a ship must make a morale check (1-3=strike, 4-6= fight on) when all the officers are killed.

Boarding is handled by closing to Point Blank range and trying to grapple with an enemy ship (they get a chance to un-grapple). If the grapple is successful (or the ships were fouled in some other way), you can send any crewmen not involved with the grappling to the boarding party. Both sides add up their figures, with Marines and officers adding two points and regular sailors adding one. Then a die is rolled, the number is multiplied by the total for the crew, and then divided by ten. The side with the lower score loses that value in crew, Marines, and Officers. The loser is pushed back one 'deck' with ships usually having two decks. If a crew loses the last deck, the ship is captured. If the attacker loses any round they are pushed back to their own ship.

Overall it packs a lot of information into the four pages of rules and it looks like it would play nicely. If you want a quick play set of rules, these look like a good way to go. Here is a short list of the pros and cons I saw with the rules.

Pros: fast playing without much bookkeeping and the rules enough period flavor to work. Probably a good set of rules for convention games.

Cons: Not much differences between guns and it seems like ships may be sunk pretty easily, but that is just my impression without playing.